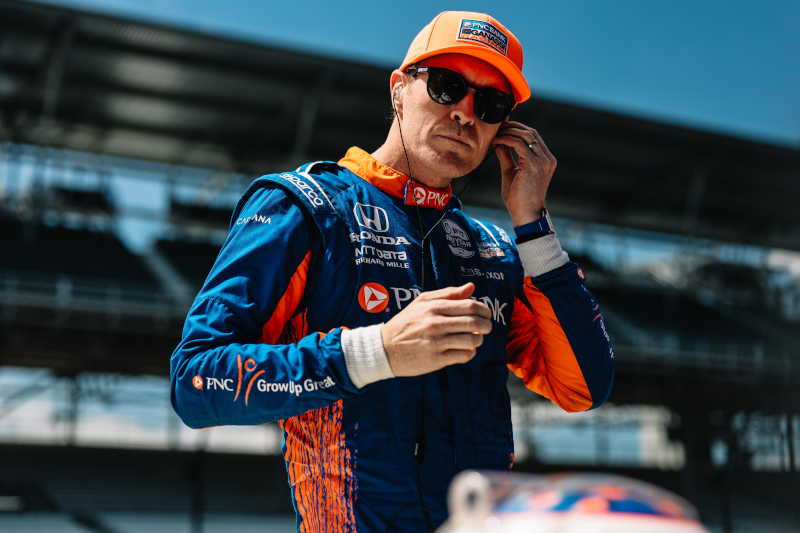 The top of the scoring pylon at the Indianapolis Motor Speedway reads a lot like the 2020 Indy 500, with Scott Dixon leading the way in the early session and Takuma Sato ending the day fastest.

The first session of the day was for veterans only, and on his eleventh of twenty-five lap, Dixon set a speed of 227.119 mph. He was followed closely by Chip Ganassi Racing teammate Marcus Ericsson in second.

Dreyer & Reinbold Racing saw both of their cars in the top ten, the fastest of which was Sage Karam in third. Santino Ferrucci was sixth fastest, a fantastic way to start the month of May for the team.

Fourth fastest was Conor Daly, feeding off of the momentum of his top ten finish in the GMR Grand Prix, with Marco Andretti fifth leading the way for Andretti Autosport. Seventh was 2021 Indy 500 Rookie of the Year Scott McLaughlin, leading the way for Team Penske, with Alex Palou eighth and Pato O’Ward ninth.

Rounding out the top ten was JR Hildebrand for A.J. Foyt Enterprises, with his teammates Kyle Kirkwood eleventh (fastest of all rookies) and Dalton Kellett thirteenth in a very impressive first outing for the four-time champion’s team.

The middle portion of the day was reserved for Rookie Orientation Programs and Veteran Refreshers, meaning that Stefan Wilson and DragonSpeed/Cusick Motorsports got two whole hours with the track all to themselves. In a shocking twist, Wilson went fastest in this portion of the day.

Then in the late afternoon, all 33 cars hit the track and Dixon picked up where he left off earlier in the day, sitting at the top of the speed charts for a majority of the session. Sato came in with less than five minutes left to casually drop the fastest lap seen all day, hitting 228.939 mph to knock Dixon off the top spot. Sato’s rookie teammate David Malukas was fastest of all rookies in the late session in seventh with a 226.448 mph lap speed.

Splitting the Ganassi train was Rinus Veekay, who finished fifth fastest. Team Penske once again only had one car in the top ten, this time it was Josef Newgarden in eighth. Marco Andretti finished the day in the top ten, finishing tenth.