Jake Hill continued his brilliant record of winning every live televised Sunday race of the season by winning Round 12 of the 2010 Ginetta Junior Championship at Snetterton – but his win wasn't without some controversy. It was Chris Swanwick who crossed the line first, but later had his win taken away, giving Hill the win to help him maintain his lead in the title race, though now by only a mere two points.

It was a Team Parker Racing lock out of the front row of the grid, with Swanwick on pole and Adam Bonham second. The three main title rivals followed, with Hill third, Louise Richardson fourth and Tom Ingram fifth. Jody Fannin completed row three.

Swanwick got the jump on the line, leading the group into Riches for the first time, with Bonham slipping into second and Hill third. The field got through the first two corners cleanly, but the same couldn't be said as they headed through the Esses. Contact between Fannin and Sarah Moore sent the reigning champion spinning across the front of the field. With nowhere to go, the unfortunate Seb Morris and Finlay Ractliffe hit her, with Morris then collected by Ryan Ractliffe. The incident caused the retirement of Morris and Ryan Ractliffe, with the safety car brought out as they cleared up Morris' car.

Swanwick lead the early stages of the race

The safety car was to be out for a long time, with Morris' stricken car proving tricky to clear up, meaning by the time the race restarted, the race had ticked over to a countdown clock, with 5 minutes to race as the safety car pulled in.

As they restarted, it was Swanwick leading, ahead of Bonham, Hill, Richardson, Ingram and Alex Austin. With little time remaining, the drivers were quick to try and make a move up the field. The first to try was Ingram, who made a move on Richardson into Sear, but after braking too late, ran wide, allowing Austin through. Ahead, a good exit from Sear gave Hill a run on Bonham, allowing the Tollbar driver to slid through at the Esses with ease into second place. Bonham tried to fight back quickly though and tried to line up Hill into the Russell Chicane. The Team Parker racer carried too much speed into Coram though, forcing him to run wide and unable to stop in time, had to straight-line the chicane. This got him past Hill, though he wisely let him back through on the main straight.

Behind, Ingram was regain his place from Austin and after getting a run down the main straight, slid past at Riches for fifth. In front, Swanwick still led, though the quick Hill was catching. Bonham held third until a mistake at the final chicane pitched him into a spin, dropping him down to twelfth. This promoted Richardson to third, though Ingram began placing her under immense pressure, the Hillspeed man desperate for a podium finish.

As they entered the lap eight, the final lap, the fight for the lead began to heat up. Getting a good run out of Sear, as he has done all weekend, Hill got into the slipstream of Swanwick, sliding past at the Esses to take the lead. Swanwick wasn't going to give up his win that easily though and fought back as they went through the Bomb Hole and headed into Coram.

Then came the race's moment of controversy. A twitch by Hill at Coram gave Swanwick the chance to move alongside as they headed to the Russell Chicane. Both drivers braked late and slight contact between the two forced Swanwick onto the grass and across the chicane, passing Hill in the process. Swanwick would cross the line first and take the win, followed by Hill. Swanwick went on to celebrate the win on the podium, though his joy was to be short lived, with officials reversing the result later in the day. They deemed Swanwick to have gained an unfair advantage, issuing a 3 second penalty, promoting Hill to the win and dropping Swanwick to second. Despite an appeal from Team Parker Racing, who felt that Swanwick had no option to run wide due to being hit by Hill, the decision stood and Hill got the win, his seventh of the season. 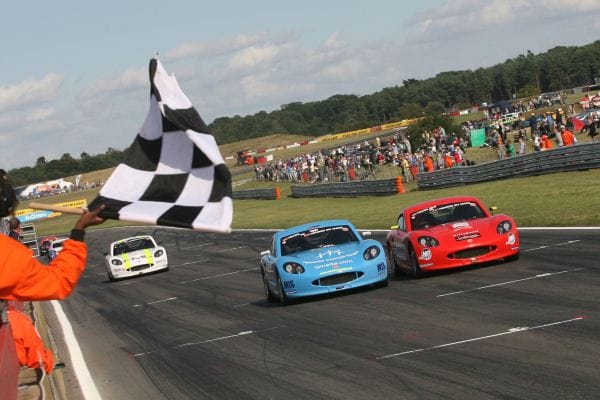 Behind, the battle for third couldn't have been closer. A poor exit from Richardson out of the final chicane gave Ingram a run, with the two crossing the line side by side to a photo finish. Despite the timing screens initially giving it to Ingram, Richardson was awarded third, by the smallest of margins, 0.001 seconds. Fifth place went to FML driver Austin, with Fannin sixth. Tom Howard, driving for Tollbar after switching from TJ Motorsport over the summer break, finished seventh, ahead of David Moore and Maverick Domene. After her earlier accident, Sarah Moore recovered to tenth, while another spin by Bonham on the final lap dropped him to 15th.

As they leave Snetterton, the title race is wide open, with the top three split by only 4 points. It's Hill who remains in the lead of the championship after being awarded the win, but now by only two points from Richardson, who moves right into the hunt after her superb maiden win. The ever consistent Ingram is only 2 points further back in third. Behind, another good weekend by rookie Fannin cements his fourth place in the standings, over 20 points clear of David Moore and Howard.

Next up for the youngsters is Silverstone in two weeks time on the 21/22 August, where fans can look forward to two more action packed, exciting races.

By Maurice Henry
5 Mins read
Maurice Henry rounds out the 2021 season and looks ahead to 2022.