Patience, intelligence and good pit work saw Denny Hamlin bring the #11 FedEx Toyota home ahead of the pack after 500 laps at Martinsville on Sunday evening to pull Jimmie Johnson‘s points lead down to just six, the closest it has ever been with only four races left in the NASCAR Sprint Cup Series championship.

Having qualified the Joe Gibbs Racing car on pole Hamlin led the field away from the green flag but within eleven laps had been passed by Marcos Ambrose and started to drift back into the pack. He was in fifteenth spot on lap 50 after pitting during the first caution when Travis Kvapil was the first of what would be many drivers to blow a front tyre, an occupational hazard at the tight 0.526 mile track known as the Pretty Paperclip. With drivers making a tight left turn every ten seconds it takes a unique skill here to not over stress the front right tyre or the brakes.

From that fiftieth spot Hamlin started clawing his way back through the pack until by lap 84 he was running in close company with Johnson and eventual runner up Kevin Harvick. Those three were to be tied together for most of the remainder of the race.

Hamlin’s crew chief, Mike Ford, realised after the first stint that they had not set the #11 car up properly for the race but rather than make wholesale changes to it decided to make small alterations at each stop ensuring they were going in the right direction. That softly, softly approach paid dividends and  after the final stop Hamlin knew he had the car he needed to get the job done. All he had to do now was be patient and not push too hard, hoping the cars ahead of him, Richard Childress Racing teammates, Harvick and Jeff Burton would wear their front tyres whilst his remained in good condition.

Between laps 100 and 400 there were fourteen yellow flag cautions and all the drivers were basing their strategies on there being at least one more caution during the final 100 laps, but it wasn’t to be giving Hamlin all he needed to bring his better preserved tyres into play, passing eventual ninth place finisher Burton on lap 456 and then, after running side by side with Harvick for three laps, taking over the lead on lap 471.

“We’re back, baby!” Hamlin called out as he raced to the line and he was fulsome with his praise for his crew chief and the pit crew who gained him four places at the last pit stop. In post race interviews Hamlin had to make his point that he had been criticised for his conservative strategy during the first five races of The Chase but he had always insisted he would win Martinsville and then the race for the Sprint Cup Series championship would be on. And on it most certainly is, with the six point gap between him and Johnson being no more than two places difference.

For Jimmie Johnson, who started the Lowe’s Chevrolet in 19th place, he felt that whilst his fifth place finish was not ideal it was equally not especially a bad day for him, with just Hamlin and the 3rd and 4th place finishers, Harvick and Kyle Busch gaining points on him, the rest of The Chase contenders falling ever further back and out of the reckoning. Johnson seemed to have more than his share of bumps during the race including one with his teammate, Jeff Gordon, and was lucky not to get into any serious wrecks. Still, there must be plenty of drivers out there who wouldn’t mind having a less than ideal day ending in fifth place. JJ always works at a higher level than most of them.

If a tap from Johnson didn’t do too much harm to Jeff Gordon then the one from Kurt Busch most certainly did. On lap 384 Gordon, who thought he clearly had the faster car, tapped Busch up the track as they entered turn three. Busch, incensed as only he can be, immediately got his nose against the rear of the #24 Chevrolet and spun him against the inside wall, wrecking both Gordon’s car and any chance he had of a decent result. Unsurprisingly, they had different viewpoints after the race, Gordon saying, “Either he didn’t know I was there or whatever, and cut down on me and I got into him. Kurt Busch doesn’t have a very long fuse — so either it was payback or he just got angry really quick and decided to wreck us.”

“Look, there was good racing all day amongst a lot of guys,” Busch said. “There was respect given for guys when they were getting back to the inside [depending] on who was on the outside lane on restarts. And so yeah, [Gordon] shoved me in there and I shoved him back in Turn 4. I didn’t mean to get into him that hard, but over the years with Gordon here, wrecking the 97 [Roush Racing Ford formerly driven by Busch], wrecking the 2 car — whether you’re a current Kurt fan or an ex-Rusty [Wallace, who drove the blue No. 2 before Busch] fan, he’s wrecked the 2 car a lot here.”

Chad Knaus, crew chief to Jimmie Johnson, said over the radio to his driver during the race, “If you hear a really loud cheer go up you know that Junior is leading!” On lap 285 that cheer went up as did most of the spectators as “Junior Nation” rose to its feet in unison. The loyalty of Dale Earnhardt Jr‘s supporters is as steadfast as it is phenomenal. He remains by far the most consistently popular driver despite having endured a lacklustre couple of years and the “Nation” made the most of having something to cheer about as the #88 Amp Energy/National Guard Chevrolet led for a total of 91 glorious laps. 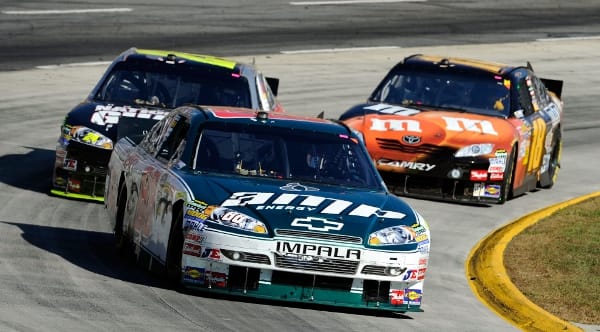 Undoubted hero of the day, though, was Mark Martin in his ebay Motors/GoDaddy Chevrolet. By lap thirty he thought his brakes were going from him and he was in for a long afternoon. He remained in the top twenty for almost half the race but his day didn’t get any better when, on lap 225, A.J. Allmendinger bumped into the #5 Chevy, sending Martin into the wall and severely damaging his car. Hasty repairs had the car back on track but now back in 32nd place with half the race left to run. He got a free pass on lap 384 which brought him back on to the lead lap and by three quarter distance Martin had fought his was up to 23rd. Twenty-six laps later with just 100 laps remaining he was still no higher than 18th.

But, from lap 400 Martin was a man on a mission. Remembering that each lap only took just over twenty seconds his progress through the field showed his electrifying pace. In the last fifty laps he passed Dale Earnhardt Jr., Joey Logano, Kyle Busch, Jimmie Johnson, Jeff Burton and Kevin Harvick, fast and hard racing men all.

After the race, rubbing a very painful left knee, “No big deal”, and limping away, Martin said, “Hey, I gave them something to think about. I’m old, but not that old.” Having been overshadowed by his teammates at Hendrick Motorsports, Jimmie Johnson and Jeff Gordon, this season Martin showed them that at 51 years of age he still has what it takes to race them to the line.

Other top ten finishers were Logano – 6th, Edwards – 8th, Burton – 9th and gaining the five points for most laps led, and finally Brad Keselowski taking his first top ten finish in the Sprint Cup this season, and this despite him virtually sewing up the Nationwide Series title on Saturday when he won the 5 Hour Energy 250 race at Gateway International Raceway at St Louis.

Round seven of The Chase takes place on Sunday at Talladega in Alabama. This is the race that most drivers dread. As Hamlin says, he will finish either top five or wrecked. A super speedway where they fit restrictor plates to the carburettors to control speeds means the cars run – literally – nose to tail for five hundred miles. One bad move usually takes out several cars in a high speed wreck. The only driver looking forward to this race is Harvick who won the spring race there in April. Harvick and Clint Bowyer swapped pit crews for Martinsville after the #29 car lost too much time during pit stops and the improvement has boosted Harvick’s optimism for these final few races.

Harvick remains third in the title race, 62 points behind Johnson and still most definitely in the reckoning. Kyle Busch jumped ahead of Gordon into fourth place but has to be an outsider with a 172 point deficit to make up.

Kevin is the latest addition to the TCF team specialising in NASCAR.
Articles

By Justin Nguyen
2 Mins read
Due to NASCAR wanting driver Tarso Marques to get Xfinity Series experience before débuting in the Cup Series, Team Stange Racing has pushed its maiden start from this weekend’s Road America race to Watkins Glen in August.
NASCAR Cup Series

By Justin Nguyen
5 Mins read
Pit stops and rain defined the NASCAR Cup Series race at Nashville Superspeedway, and Chase Elliott dominated the final restart to win for the second time in 2022.
NASCAR

By Justin Nguyen
2 Mins read
Many drivers were less than pleased with each other after the Superstar Racing Experience’s South Boston round including Tony Stewart, but at least he was able to get the last laugh in the end.