Let’s not forget that it was Carl Edwards who won the 2010 Ford 400 season finale race at Homestead-Miami on Sunday afternoon, his second successive win of the year. But it was that man Jimmie Johnson who became the first NASCAR driver to win five consecutive Sprint Cup Series titles and won it in a race where fortunes changed throughout.

It has become fashionable over the past two or three years to complain that Johnson’s domination of the sport has made it boring and that the man himself is bland, corporate and lacking emotion – or, as the Americans call it, vanilla. If you heard Johnson from the moment he crossed the finish line he was anything but bland and lacking emotion. He screamed, yelled, whooped and hollered as good as any man before him. He knew this title hadn’t been gifted to him in any way. He had started in second place in the championship and had fought to get himself in a winning position, and in the process become only the third man to win the title at the last race starting from behind in the points.

Johnson was helped to some degree before the race had even started by the poor qualifying positions of his title rivals, Denny Hamlin and Kevin Harvick. In NASCAR racing there is always a risk involved in fighting through the field from a lowly starting spot and so it proved for Hamlin on lap 24 when he collided with Greg Biffle, sending Hamlin spinning across the grass and bending his front splitter in the process. Until that point Hamlin said his car had been unbelievably fast but it was never the same afterwards. Diligant pit work saw it repaired without too much loss and he restarted in 39th place.

Hamlin was to have luck play his way just after the half-way point when Joey Logano spun into the wall just ahead of him seriously damaging his car but Hamlin somehow found his way through the carnage. With fifty laps to go the #11 car of Hamlin was shown in the championship lead by 22 points over Johnson but lady luck finally deserted Hamlin with twenty-four to go when the yellow came out for Kyle Busch‘s ride into the inner wall, of which more anon.

Hamlin was caught a lap down by the yellow even though he was just the length of the back straight behind Johnson and Harvick. As he ran towards the pit entrance once the pit had opened his crew chief, Mike Ford, told him to stay out whilst they saw what other cars were doing. Hamlin was driving towards the pit lane but at the very last moment headed back up on track to follow Ford’s orders. And that was the moment Ford changed his mind and called, “Pit, pit” over the radio. The call was a fraction of a second too late and that moment’s indecision marked the end of Hamlin’s challenge. From being a straightaway down he ended up fifteen places down and the cars behind him were going to run to the flag on fresh tyres. Inevitably as their tyres came in so Hamlin became a sitting duck and just drifted away, back down the order. 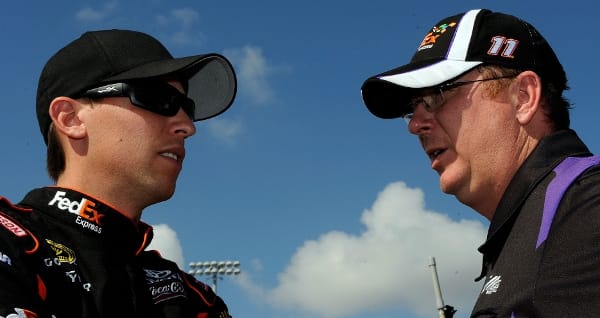 On Friday whilst Johnson concentrated on qualifying set-up Hamlin’s team put all their efforts into getting the best race trim. That decision and the prevaricating pit call on lap 243 were the two points where Hamlin lost the title and in both cases it was Mike Ford who made the wrong decision. Johnson’s crew chief, Chad Knaus, never lost his focus, never made anything other than strong, positive decisions throught The Chase, even to binning his pit crew and using the #24 crew for the last two and a half races, and therein lies the difference between the teams.

To be honest Kevin Harvick never really seemed convincing that he could take the title and yet at one point during the race there was just seven points between all three contenders. He didn’t win a race throughout The Chase and never really seemed as though he was going to. His qualifying positions were invariably in the twenties – usually the low twenties – and although he made fairly good progress through the field each time he seldom looked as though he was on his way to victory lane. And, more importantly, he often failed when it mattered most, such as last night, to get those five points for leading a race or the five bonus points for leading most laps. At the end of a season, especially when the title contenders are covered by just ten or twenty points those bonus points can really matter.

Harvick did race strongly though as witnessed with his incident with Kyle Busch. As Harvick said in the post race interview, “He raced me like a clown all day, running three wide, on my back bumper and I finally got tired of it and sent him into the fence – I just didn’t lift.” On lap 243 Busch slid up to the outside just in front of the #29. As he admitted Harvick didn’t bother lifting, just flipped the #18 around and Busch’s car hit the inner wall hard. Busch tried to bring it back to the garage but along the way a fire started and eventually turned into a fireball with the in-car camera showing the inside thick with black smoke as his crew chief told him to get out.

When Harvick told the story at the press conference a bemused Hamlin said, “That’s how your teammates raced me all day, too,” to which Harvick drily replied, “That’s ok; I parked your teammate.”

Harvick’s championship hopes were dealt their fatal blow on lap 187 when the field pitted under a caution. Harvick had an excellent stop and left pit lane in the lead but a lap later was told he had sped entering the pits and would have to go to the back of the longest queue. He was adamant that he could not have sped as he followed two cars into pit lane but NASCAR insisted their ruling was complied with. From there Harvick clawed his way back to finish in third place but never looked like closing in on Johnson ahead of him or the very fast #99 of Carl Edwards who easily led the most laps on the day, 190 out of 267.

Johnson’s race wasn’t all plain sailing, on lap 99 he so nearly collided with the #18 car of Kyle Busch on pit lane and some of his pit stops were below par costing him a few places. But Chad Knaus knows how to rally his troops and the pit crew always managed to produce the good stops on the ones that mattered most.

Johnson has only ever raced in the Sprint Cup Series with Knaus as his crew chief and with Ron Malec as his car chief. It is a team built on fierce loyalty and dedication made up of men who understand that Knaus is a hard taskmaster, driving them all on constantly, but more importantly, he is also a determined competitor who likes to win and has no interest in coming second.

In the process they have given Rick Hendrick and the Hendrick Motorsports team their tenth owners’ championship breaking their tie with Petty Enterprises on nine. Hendrick becomes the first team to win five straight titles having been the first to achieve four with Jeff Gordon and Terry Labonte between 1995 and 1998.

Johnson and Knaus acknowledge this as their most important title because they had to fight so hard for it – and Hamlin needs to be credited with his part in that. For five years over one hundred men have tried to dislodge this team from the top spot and not one of them has made it yet.

And let’s not forget that Johnson’s fifth title moves him that bit closer to the all time leaders in the title stakes, Richard Petty and Dale Earnhardt with seven championships each. That really is legendary company and it would take a brave man to bet against Johnson eventually matching them. Most certainly he has won his five titles in less races than either of them and, at 35 years of age has a few more years left in him yet.

The racing starts again at Daytona in less than twelve weeks with the Sprint Cup Series championship kicking off just eight days later. Johnson and Knaus want to to go for six in a row, Hamlin believes he has seen chinks in their armour and he is the man to exploit those weaknesses and be the driver who ends Johnson’s reign.

Chad Knaus stepping away as crew chief, to become Hendrick VP of Competition in 2021

By Justin Nguyen
3 Mins read
Chad Knaus, one of the most decorated crew chiefs in NASCAR history, will step away from the pit box after the 2020 season as he takes over as Hendrick Motorsports’ VP of Competiton.
NASCAR Cup Series

By Justin Nguyen
4 Mins read
Kurt Busch kicked off the NASCAR Cup Playoffs Round of 12 by holding off Matt DiBenedetto in overtime for his first career win at his home track Las Vegas.
NASCAR Cup Series

By Justin Nguyen
5 Mins read
Cup title contender Denny Hamlin has partnered with the great Michael Jordan to form a NASCAR team, fielding a car for Bubba Wallace. The team has acquired the charter from Germain Racing, which will close up shop at year’s end.