The first race of the 2011 NASCAR season is the traditional and non-championship Budweiser Shootout which takes place this Saturday at Daytona International Speedway. Across the following seven days there will be the opening races for the ARCA Series, Camping World Truck Series, Nationwide Series and on February 20th, the big one, the Daytona 500, the first race of the  Sprint Cup Series and the commencement of the title race.

The non-points scoring opening race, was known between 1979 and 1997 as the Busch Clash and since then firstly as the Bud Shootout with the current Budweiser name being adopted in 2001. The original qualification criteria was a race open to winners of the pole positions during the previous season’s races with possibilities for wild card entrants. Over the years the criteria has changed, especially for each of the past three years and for 2011 the goalposts have been moved yet again.

For this year’s Shootout the following drivers qualify. All twelve drivers who made The Chase in 2010. Past NASCAR Sprint Cup Series champions. Past Budweiser Shootout champions.

Past winners of the Daytona 500 and Coke Zero 400 (the mid-season Daytona race). Finally, and new for this year, NASCAR Sprint Cup Rookie of the Year drivers from 2001 to 2010 are allowed to compete. Some of the drivers qualify in more than one category.

The previous winners of the Shootout are Mark Martin and Ken Schrader, with brothers Terry and Bobby Labonte as former Series champions. And that leaves Kevin Conway, Kasey Kahne, Joey Logano, Juan Pablo Montoya, Regan Smith as Rookies of the Year.

It’s easy to see why four of the five rookies were counted in but many observers are pondering the inclusion of 2010 rookie Kevin Conway. It is undeniable that the only reason he got the title last year was because he was the only driver who fulfilled the criteria to be Rookie of the Year. In 28 starts Conway had one 14th place finish, one 27th and two in 28th. All other finishes were between 30th and 41st place. Just five of his qualifying runs had him in the thirties, all others were 40th place or lower. So Conway didn’t exactly show any outstanding talent. 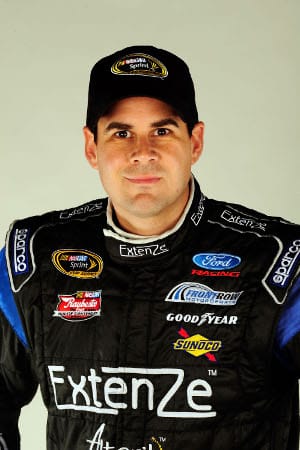 Kevin Conway will be amongst the field Saturday, but only by virtue of being the only rookie in 2010

Conway isn’t the only driver who would not rate as an obvious one for inclusion. Derrike Cope started one Sprint Cup race in 2009, his only race in that series since 2006. Geoffrey Bodine started one race in 2010, his first since 2004 and John Andretti also started just one race last year; the last time he managed a top ten result was eight years ago. The Labonte brothers, although still racing, regularly in Sprint Cup in Bobby’s case, are far past their days when they could be considered potential race winners.

Of course, actually taking part in the Shootout is dependent upon these drivers getting a car to drive for the race but whilst recognising Budweiser would like the race to be an All Star event it seems to be undermining the hoped for glitz if there is either a reduced starting line-up or a field made up with fading lights when you consider who has been left out.

Brad Keselowski made the point on Twitter that he hadn’t been invited and some may say justifiably so when you consider he is the 2010 Nationwide Series champion. David Reutimann also didn’t make the grade despite winning one race and having nine top 10 finishes last year. Equally a case could be made for A J Allmendinger who had 2 top fives and 8 top tens plus a pole position.

There will be two practice sessions for the invited drivers on Friday 11th and then later that evening at the Budweiser Shootout Draw Party there will be a blind draw to determine starting positions.

The race itself is split into two segments, the first of 25 laps and the second twice that distance. All green and yellow flag laps will count. Between the two segments will be a ten minute pitstop when the teams can change tyres, add fuel and make normal suspension adjustments, either in the pit road or in the garage. They will not be permitted to change springs, shocks or rear ends during this break. In the event of a yellow flag near the end of the race the usual green-white-checker rule will apply.

The race is scheduled to start at 8.10pm Eastern time, just gone 1am Sunday morning for us in the UK.