As Jeff Gordon clambered from his Chevrolet in victory lane on Sunday evening all the four times champion could say was, “Are you kidding me? Pinch me man, pinch me”, as he finally broke his near two-year, 66 race winless streak. He would have taken the win any way he could have but it was all the more satisfying that he chased down Kyle Busch and passed him with nine laps to go to be the only man to finish ahead of the younger Busch brother all weekend, Kyle having dominated the Nationwide and Camping World Truck Series races at Phoenix International Raceway.

As consolation Busch heads to his hometown of Las Vegas for next weekend’s race heading the championship table by three points from big brother, Kurt, who has 77 followed by Tony Stewart and A J Allmendinger tied on 69 points in third and fourth places respectively and Gordon fifth with sixty-five.  It’s worth noting that the first four places are held by drivers of Toyota, Dodge, Chevrolet and Ford.

Gordon’s race had been far from plain sailing, having been caught up in a wreck on lap 59 when Carl Edwards headed for the outside wall and Gordon had nowhere to go but with the no.99 car. The whole episode had been triggered by Kyle Busch losing his car and slamming into the side of Edwards sending the latter on a bumpy ride over the edge of the infield before he rejoined the track and then slewed up to the wall.

The right side of Edwards' no.99 tells the story - Kyle Busch's tyre, then the blue of Phoenix's wall

After the race Busch was the first to apologise, “It was a real big mistake on my part and the first person I have to apologize to is Carl Edwards, obviously for what happened there on the backstretch.  It just got out from underneath me and we were getting bounced around like a ping pong ball there for a while.  I got into him and just killed his day.”

That was one of several wrecks during the race. By half distance over half the field had been involved in a crash, fourteen of them on lap 66 when Matt Kenseth rubbed against Brian Vickers‘ Toyota, cutting one of the latter’s tyres. Vickers spun into the wall and triggered a chain reaction involving Jamie McMurray, David Regan, Robbie Gordon, Casey Mears, Jeff Burton, Clint Bowyer, David Gilliland, J J Yeley, Bobby Labonte, Andy Lally, Regan Smith, Dale Earhardt Jr. and David Reutimann.

With wrecked cars strewn across the track the race was red-flagged for fourteen minutes and twelve of the cars needed to be taken to the garage for repairs with a further three being repaired in pitlane. Clint Bowyer had a strong opinion about the crash,  “We're all smarter than this. We're all better race car drivers than this. We're driving like idiots. Everybody is taking two tires, four tires; everybody is on complete different agendas right there and we never could get going. It's just stupid.” Jamie McMurray, whose car was one of those in the garage for an attempt at extensive repairs, deserved an award for his optimistic outlook, “The only good news is that a lot of really good cars are in the garage with us – drivers I should be racing for The Chase!”

Within fifty laps of the crash many of the cars had reappeared on track including Clint Bowyer, David Reutimann plus the driver who had been leading the points table coming into this race, Carl Edwards. Whilst the majority of the repaired cars sported tape holding body panels in place at least two returned with no bodywork forward of the windshield and were only allowed to continue after they had heeded NASCAR’s warning to get their speed up above the safe minimum the governing body thought appropriate.

Another unlucky driver in the race was Joey Logano whose Home Depot Toyota developed an engine malady quite early in the race. Logano punched his steering wheel in frustration as he struggled to get his motor up to 9,000 rpm, about five hundred less than his competitors. He was told by his crew chief to keep going but with just less than one hundred laps to go his engine blew leaving him  mired in 29th place in the points table.

Other potential championship contenders finding themselves perilously far down the points table include Brian Vickers in 33rd, Jeff Burton 32nd, Greg Biffle 28th and Jamie McMurray 26th. The lifeline that the new points system offers these drivers is that they are not solely dependent on misfortune befalling the current championship leaders. If they can manage one or better still two wins before the twenty-sixth race in the series they will still have a very good chance of making The Chase.

Trevor Bayne‘s week of glory ended ignominiously against the wall as early as lap 50. He appeared to try to move up towards the wall into a gap that plainly didn’t exist but accepted with good grace that stock car racing has both highs and lows. 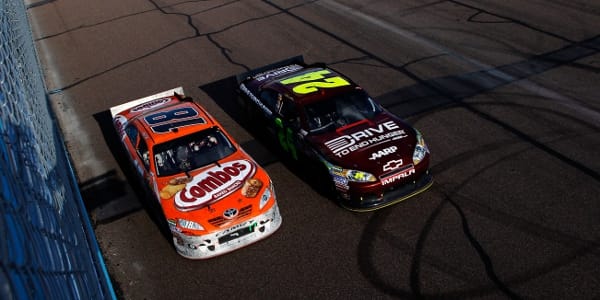 As well as providing Gordon with the winning car Hendrick Motorsports had two other finishers in the top ten with Jimmie Johnson third and Dale Earnhardt Jr. in tenth plus Mark Martin finishing in thirteenth place vindicating the reshuffle Rick Hendrick ordered within days of the 2010 finale. On top of that two Hendrick powered cars, the Stewart-Haas Chevrolets of Ryan Newman and Tony Stewart finished fifth and seventh respectively.

Gordon’s victory was his 83rd and leaves him tied with Cale Yarborough in the all-time wins list. As Gordon said, “It's been a long time. I'm going to savor this one so much.”

By Justin Nguyen
3 Mins read
Martin Truex Jr., who won Martinsville last week, will lead the NASCAR Cup field to green at Richmond. Ben Rhodes will do the same for the Trucks.
NASCAR Cup Series