Mark Martin only led one lap at Las Vegas in the NASCAR Nationwide Series race but that was all it needed to win on Saturday night. Whilst ultimately his win came from Brad Keselowski‘s misfortune it was Martin’s measured driving over the last ten laps or so, knowing he was low on fuel, that put him in place to capitalise when the lucky break came.

The early part of the race had been dominated by local boy Kyle Busch who at one point had a lead of ten seconds but a caution flag on lap 66 for fluid on the track closed everything up and from then until eleven laps before the checkered flag the lead was shared between Busch, Denny Hamlin and Carl Edwards.

Busch’s hopes of winning were lost when on lap 131 he was making a fast run in the midst of a pack of cars, chose to dive down to the inside rather than take the high line and as he reached the white line so Brad Keselowski moved down enough for Busch to need to put two wheels on the grass. He almost gathered up the resulting spin but not enough to prevent a heavy hit on the inside wall and then straight to the garage.

“I had a really big run off the top, and I didn't want to go to the outside,” Busch explained. “I wanted to kind of get down and be on the bottom, so I could get down on the white line in Turn 1. I didn't even make it that far. I got to the bottom of the 22 [Keselowski], and I guess he came to block a little bit. I didn't want to run into him, so I went into the grass, and I know the grass typically doesn't work, so I looked kind of stupid doing that. Tried to hang on to it, and just couldn't get it back straight in enough time and got into the inside wall.”

The caution for the Busch incident followed eight laps later by another yellow flag period for an accident on the back straight put drivers on different fuel strategies. The top five at this stage consisted of Carl Edwards, Denny Hamlin, Ricky Stenhouse Jr., Reed Sorenson and Michael Annett but all of them were going to need another fuel stop and were dependent upon another caution period.

Behind them were Brad Keselowski, Martin, Justin Allgaier and Danica Patrick who was making the most of her fast car and enjoying a hard battle with Trevor Bayne. All of that group were hoping there would be no more yellows shown and it was their wish that prevailed.

As one by one the lead group pitted with just over ten laps to go so Brad Keselowski and co moved up in to the lead positions. It was Keselowski who took the white flag to lead the last lap but somewhere along that lap he ran over a piece of debris, his tyre instantly deflating and sending him into the wall. He recovered quickly enough to get the car across the line but not before Mark Martin and his teammate Justin Allgaier had swept through to take the top two positions.

It was Martin’s 49th Nationwide Series win and Turner Motorsports‘ first. After the victory lane celebrations Martin said, “We got us another trophy. That's all I care about. I don't care how many I ever won before. This one's the one that's special, 'cause this one's today. And more important than me,  this is Turner's and [crew chief] Trent [Owens'] first win. That's the coolest. The last time we won here [2008], it was Dale Jr.'s [first win as a car owner] as well. Those are the kinds of milestones that I look at with pride.”

Keselowski was philosophical about his misfortune after the race. “I just ran over something because it went down pretty quick,” Keselowski said of his blown tire. “It was just one of those days where you do everything right and don't win. That's why they call it racing.”

Danica Patrick drove an excellent race having been two laps down at one point. It took her three attempts to be in position for the Lucky Dog pass on to the lead lap but eventually she made it and then proceeded to make good progress through the field. When she caught Trevor Bayne and was battling for eleventh place she was given an object lesson by the Daytona 500 winner in how to defend a spot but Patrick showed great patience and when the opportunity came passing back markers she was through and chasing down Brian Scott for tenth place.

Over the last few laps Patrick held a secure ninth place and as the leaders made their fuel stops she rose to fourth, the position she held as the no. 7 GoDaddy Chevrolet crossed the line. 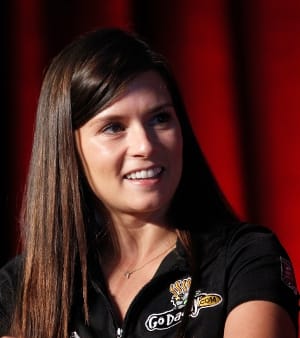 That result puts Patrick into the history books as the highest placed ever female in any of the three NASCAR national championships taking that title from Sara Christian who had held it since 1949 with a fifth place in Pittsburgh.

The result should also finally silence Patrick’s critics, of which there seem to be many, as a top ten place was clearly earned on merit whilst acknowledging the run in to the top five places came from fuel strategy. The next race, though, is at the half-mile Bristol raceway, a track Patrick has never raced at before. With a left turn every quarter of a mile and forty-three cars on such a short track the “Paperclip” has its own unique style of racing, one which she hasn’t experienced in either her stock car or single seater racing career.

With the Sprint Cup drivers not qualifying for championship points it is Sorenson who leads the table with 111 points, two ahead of Stenhouse Jr. Jason Leffler is third with Patrick fourth and Justin Allgaier fifth.

By Justin Nguyen
2 Mins read
NASCAR and Satisfi Labs are collaborating to develop and launch the Answer Engine, a virtual assistant that willl provide help and information for fans at various tracks.
NASCAR Xfinity Series

By Justin Nguyen
1 Mins read
Jason White, who ran the Xfinity opener at Daytona in his first NASCAR race since 2014, has joined MBM Motorsports for Talladega later this month. It will be his first race there in 8 years
NASCAR Xfinity Series

By Justin Nguyen
2 Mins read
Colin Garrett, who ran five races for Sam Hunt Racing last year and was the team’s first-ever driver when they débuted in 2019, will return to the #26 car for Talladega.