With the NASCAR Sprint Cup Series having a rare week off a handful of drivers from the senior series decided to race in the Nationwide and Camping World Truck Series on the concrete surface at Nashville, Tennessee and two of them, Kyle Busch and Carl Edwards, took one win apiece, both quite emphatically.

Friday night was Truck racing and Busch dominated the race, especially in the first 140 laps or so. It was following a caution period that series regular, Ron Hornaday Jr. outsprinted Busch on the restart, made a firm move across the front of the no. 18 Toyota to take the lead and put Busch under some sort of pressure. Hornaday’s glory was short-lived however when a further caution, the sixth and final one was called just four laps later. With just three laps remaining when the green flag was waved Busch wasn’t going to be beaten away again and treated his adversary to a similarly forceful move.

In his efforts to give Busch some sort of competition over the last few laps Hornaday tore his tyres up and couldn’t avoid being shuffled back to finally finish in fourth place.

A delighted runner-up was Nelson Piquet Jr., highest points scorer on the night – Busch is ineligible – and achieving his first podium finish in NASCAR racing. After a shaky start to his season the second place enabled him to climb eight places in the rankings to seventeenth.

Timothy Peters was the third placed man and moves into second place in the championship table, just three points behind leader Johnny Sauter who finished in seventh.

Busch continues this season to create impressive statistics. During the race he passed the milestone of 20,000 laps led in NASCAR competition. And in two races in the Trucks at Nashville his record is two pole positions, two wins and he has led an astonishing 271 of the 300 laps he has raced.

The one big difference between the two races has been Busch’s treatment of the trophy traditionally given to race winners at the home of Country Music, an unique, hand-painted Gibson guitar. Immediately after his win in June 2009 Busch had the guitar in his hands for about fifteen seconds before he deliberately smashed into the ground three times – rock’n’roll style – breaking it into several pieces. Sam Bass had spent, he claims, hundreds of hours preparing and painting the guitar and was understandably dismayed. This time the new, more mature Busch treated the trophy with the respect it deserved.

The next race for the Camping World Truck Series is on May 13th at Dover International Speedway in Delaware followed a week later by the N C Education Lottery 200 at Charlotte, North Carolina which will see the debut in NASCAR racing of former F1 World Champion Kimi Raikkonen.

Saturday’s Nationwide Series race started off with a dominating performance by Carl Edwards. In fact, he thought he was going to run away with the race but Kyle Busch and Brad Keselowski had other ideas towards the end of the race and made Edwards sweat for his win.

“At the end of the race, I was pedaling for all I had,” Edwards said. “I was kind of excited at the beginning of the race. I thought, 'Boy, we're going to run off with this thing. It's going to be easy.' Then at the end, that was white-knuckle. I was driving as hard as I can drive, racing him [Busch] and Brad. In the end, it's better to have a race like that, but it was really nerve-wracking for me.”

The win was Edwards’ second of the year and brings his total wins in the Nationwide Series to thirty-one which ties him with Jack Ingram in fourth place in the all-time wins table. Third place man in that particular table, Kevin Harvick, chose to sit this race out and gave his no. 33 car to Austin Dillon to drive and was rewarded with a more than respectable seventh place, immediately behind series regulars and teammates, Ricky Stenhouse Jr. and Trevor Bayne, fifth and sixth respectively. Third and fourth went to Keselowski and fellow Sprint Cup driver Joey Logano. 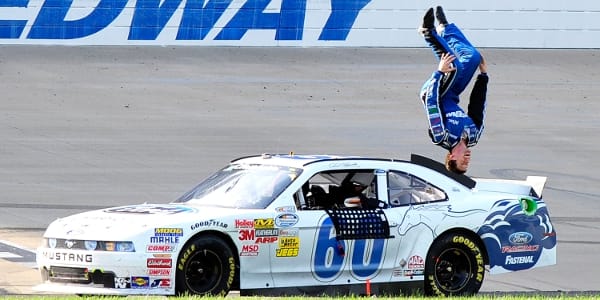 The results of Stenhouse and Bayne together with Reed Sorenson finishing eighth, Justin Allgaier, eleventh and series leader before the race, Jason Leffler, who finished in fifteenth have bunched the top seven in the title race into an incredibly tight group. Allgaier is shown as first but is tied on 264 points with Stenhouse, Leffler is just two points behind that pair and a further two points back are both Sorenson and Bayne who in turn are just one point ahead of Elliott Sadler. Amazingly, though, not one driver in the championship table this year has won a Nationwide race as the senior drivers continue to take the trophies and the money, if not the points.

Kevin is the latest addition to the TCF team specialising in NASCAR.
Articles

By Justin Nguyen
2 Mins read
A month after Josh Bilicki drove into Sargento signage during a massive wreck in the NASCAR Xfinity race at Road America, the cheese company has turned the moment into an actual sponsorship for Watkins Glen.
NASCAR Xfinity Series

By Justin Nguyen
1 Mins read
Justin Haley will return to the NASCAR Xfinity Series at Daytona on 26 August in a newly opened #14 car for Kaulig Racing. He is a two-time winner of the event.