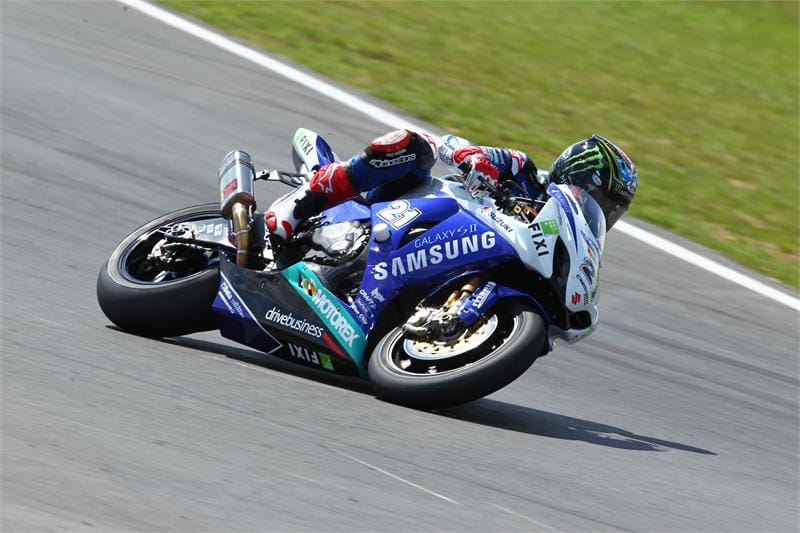 John Hopkins led the Crescent Suzuki team to a magnificent pole position at Snetterton, and immediately focused his attention on doing the double on race day.

The American's first pole in British Superbikes came as a result of a blistering lap, half a second quicker than nearest challenger Tommy Hill, and came despite an engine change prior to the session.

Hopkins commented afterwards that he is loving the new layout of the Norfolk circuit and fancies his chances of taking victory tomorrow.

“I’m simply loving this place. It’s a long and flowing lap and the corners are allowing the bike to two-wheel drift in so many places – I’m sure the fans must be loving it, too.”

“I have to thank my mechanics again today. We had a shifter issue this morning that was niggling us, so they skipped lunch and made a full engine swap before qualifying. The bike was brilliant; they’d missed nothing. So now I’d like to do the double tomorrow, to say thanks to them!”

Jon Kirkham added to the feel-good factor surrounding the Dorset-based team by putting the second GSX-R1000 on the front row in third. The Derby rider had hoped to secure a 1-2 for the team but was still ecstatic with the result.

“Third; absolutely superb! I’m happy with that. The bike’s been good all weekend and with some tweaks before qualifying the bike was better still. I was so happy to get fastest in first qualifying; if I’d repeated that lap in Q3 then we’d have a Samsung Crescent Racing 1-2, but front row is fine. So tomorrow I’ll look to stay out of trouble off the start – I can see there being some action there – and then hopefully I’ll bring home two good results.”

Team manager Jack Valentine described it as a “special day” for the team and is keeping his fingers crossed for more of the same on race day.

“We’re well chuffed. We’ve been on the pace from the word go and deserved those start positions. The Samsung Crescent team were brilliant today, swapping the engine on Hopper’s bike in time for qualifying and putting in extra effort to find JK a really good set-up. Both riders felt confident in their bikes and the results reflect that. And that was a phenomenal lap Hopper put in for Pole, something very special. We’re looking forward to some very special results tomorrow, too.”