“The car was practically a write off a week ago,” said Topcats team principal Warren Gilbert looking over the Ginetta after the race, “and we rebuilt it after Thruxton and its just won the class, that's unbelievable.”

As remarkable as the run around in fortunes from Thruxton is, and as big a day it was for Gilbert's squad, for the first half of the race the production race belonged to Intersport.

The team – with drivers Kevin Clarke and Wayne Gibson – had brought two cars out to Belgium, the pair's regular E46 BMW M3 being joined by the newer BMW brought out of storage to try to save their Thruxton weekend. Both the similarly liveried cars appeared in practice, before focussing on the newer chassis as the Sunday afternoon race approached.

Gibson was given the responsibility of the start with the always tense mid-pack approach to La Source.  However, after leading at the end of the opening lap around the 7km track, Gibson started to stretch out a lead, helped by Mercer in the Ginetta, reportedly held up by some of the slower GT class traffic. Gibson's lead the front of the class put him well within the overall top ten, with an advantage of over a minute before the driver change pitstops at half distance. 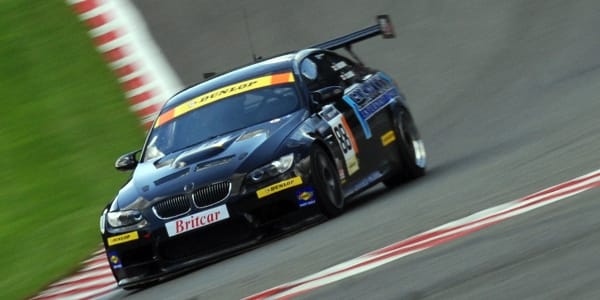 With the newer design BMW making another appearance Intersport were clear leadeers, until differential problems struck

The early portion of the production race also included a tremendous battle. Peter Cunningham, having lost the pole position advantage after taking a tight line at La Source on lap one, was joined in a battle for third in production by the Hogarth's SEAT, Sarah Bennett–Baggs in the Strata 21 BMW, Dan Norris–Jones' Lotus and Mike Ticehurst in the no.45 Mazda. James May, leading Production Class Two, was also involved, dicing with the supposedly faster cars.

The Gibson and Mercer already free of the melee it became crucial who could break away from the potentially disastrous dicing and outbraking to take a clear third place.

Bennett-Baggs was the first to escape as the battle began to fragment before starting to gain on Mercer ahead, bottled up behind Paul Bailey's GT class Ferrari.

The top three remained unchanged though the bout of stops around the half way mark of the race, Kevin Clarke taking over the driving for Intersport, seemingly cruising towards a return to winning ways.

However, with 45 minutes remaining the BMW's differential gave up exiting Blanchimont, Clarke admitting defeat and bringing the car down the Britcar pitlane, in the track's old garages on the downhill section towards Eau Rouge.

Smith and Jensen Lunn – relief for Mercer and Bennett-Baggs respectively – jumped up to first and second in class.

The Strata 21 team had had an eventful Spa weekend, a night of hard work followed the discovery of a cracked block after qualifying on Saturday. The challenge to the Ginetta Bennett-Baggs had begun in her stint came to nothing as an oil refill in the pitstop lost time, before another BMW differential problem, forced Lunn to slow and allow Mark Cunningham in the SG Racing SEAT to close in for second place.

In the final laps of the race the BMW's condition worsened, Lunn reporting smoke in the cockpit on the final lap, Cunningham coming to within two seconds of stealing second place.

Peter and Mark Cunningham – the father and son driver pairing in the black and yellow SEAT were another team who manage to fit a surprising amount of drama into the 100 minute encounter.

Embroiled in the early race battle – Peter Cunningham highlighting his tussle with Ticehurst's Mazda, complete with an opposite lock, side by side run around the double left hander of Pouhon – the elder Cunningham picked up a stop go penalty for avoidable contact with Norris-Jones' Priocept Lotus – a penalty he felt aggrieved to have been given.

“I really feel bitter about that one to be honest,” said Cunningham. “I've spoken to Mike Ticehurst who was in the Mazda behind me and his opinion is that it was in no way my fault. At the point of braking the Lotus was behind me. At the point of turn in the Lotus was behind me. I had a car on the outside of me and when I arrived actually on the apex I was hit. He tried a last minute desperate dive up the inside of La Source. I wouldn't say I took the winning of the race away from us, but it took second second place – minimum – away from us.”

James May and Alex Osborne easily paced a depleted Class Two field, Synchro Motorsport's Hondas not making the trip to Belgium, and finished fourth of the production runners.