John Hopkins took the lead in the 2011 British Superbike Championship for the first time all season by winning the second race of the day at Donington Park. The American held off a determined Tommy Hill to win his fourth race of the season but his cause was helped by a first corner crash involving two of his main rivals.

As in race one, Shane Byrne made a lightning start but Michael Laverty was right alongside him as they approached Redgate. The Northern Irishman dived for the inside but left his braking point too late, sending him careering into the side of Byrne's HM Plant Honda, leaving both in the gravel trap.

The chaos at turn one allowed Hill and Hopkins to gap the rest of the field with Ryuichi Kiyonari making it a three-way dice. The reigning champion seemed rejuvenated after his mechanical problem earlier in the day but the pace at the front proved too hot, leaving him to fend off the group behind.

The decisive move at the front came on lap five as Hopkins sneaked up the inside into the Fogarty Esses, reminiscent of the pass on Laverty earlier on. Hill was unable to mount a fightback as the Crescent Suzuki proved too strong through the high-speed sections of the lap, eventually pulling out a two second lead by the finish.

Just three weeks after dislocating a finger, Hopkins was keen to thank the doctor that helped him back to full fitness but his thoughts were with his fellow countrymen on an emotional day for the United States, ten years on from the terrorist attacks in New York.

“I had the pace and put the hammer down and was able to pull a bit of a gap on Tommy. The pain in my hand was severe as the race progresses and I was pleased when I came round and saw only one lap to go on my pit-board. I have to thank the doctor for getting my fingers ready in three weeks.”

“These victories are very special as we remember the 9/11 tragedy, a special day of remembrance, it has been a fantastic day for me.”

The final podium position went to his teammate Jon Kirkham who did Hopkins a huge favour by beating Josh Brookes and the fading Kiyonari. The title challengers ended up back in fifth and sixth respectively with Brookes losing out to Martin Jessopp and Kiyonari having to fend off James Ellison in the closing stages.

After their first corner collision, Byrne and Laverty remounted to score some valuable points. Byrne made it up to eighth after passing Chris Walker while Laverty left it until the very last corner to snatch 14th from Glen Richards.

Richards finished fourth overall in the mirror.co.uk EVO class with Graeme Gowland taking his fourth win in succession ahead of James Westmoreland and Barry Burrell. 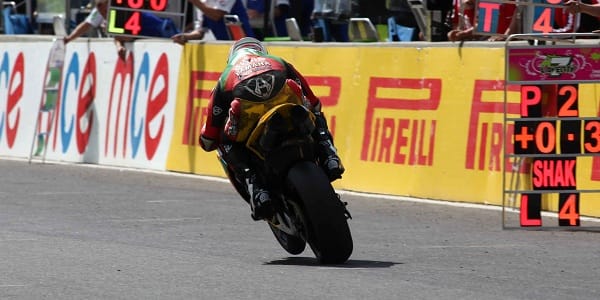 Riders Championship (After Round 10: Donington Park)