Johann Zarco's wait for a first Grand Prix victory will go on a little longer after he lost an intriguing battle with Nicolas Terol in the San Marino Grand Prix. As expected, the race turned into a head-to-head shootout between the championship rivals and it eventually went down to the final few metres.

Zarco signalled his intent right from the start as he chopped across the front of Hector Faubel. The two came into contact before and after turn one to the anger of Team Manager Jorge Martinez as the pair fell to fifth and sixth.

Terol avoided the mayhem to take the lead with Sandro Cortese and Efren Vazquez following him. Danny Kent also made a great start and briefly held second but the British teenager was shuffled back to fifth by the recovering Zarco.

Keen to avoid a repeat of Indianapolis, Zarco charged through the pack on lap two, passing Vazquez and Cortese, to haul himself onto the tail of Terol. The two AirAsia Derbis took up the chase at the front while Cortese slipped into the clutches of the group behind him involving Kent and Faubel. The two Blusens Aprilias of Sergio Gadea and Maverick Vinales were also joining in the fun after breaking out of the midfield pack.

By the end of lap five, the leading trio were covered by less than a second and Zarco was starting to look menacing. The pace was becoming more and more intense with every lap that passed and Vazquez fell victim to it halfway through, falling away from the top two at half a second per lap.

With six laps to go, mind games started to come into play as Zarco swooped past Terol at turn 12, only to run wide two corners later and allow the Spaniard back through. He made the move stick into turn four on the following lap but still seemed more concerned with the Aspar Aprilia than his own bike.

Next time around, Zarco turned his head as the frontrunners moved onto the back straight, apparently to try and intimidate his rival but Terol punished him for his overconfidence at the start at the penultimate lap, diving through into turn one.

It all came to a head on the final lap as Zarco regained the advantage under braking for turn four. Terol tried to force his way back through three corners from home but the Frenchman hung on around the outside. It all came down to the last corner and Zarco appeared to run slightly wide, giving Terol the slipstream into the home straight.

Zarco looked back again but could only look on in horror as the Aprilia breezed past to beat him by 0.022s. Vazquez came across the line in a lonely third while Cortese pipped Faubel to fourth.

For the second time this year, Zarco was involved in a photo finish

Despite falling to eighth at one point, Danny Kent battled bravely to finish sixth, beating Vinales and Gadea by less than half a second. Jonas Folger brought the second Red Bull Ajo Aprilia home in ninth while Miguel Oliveira rounded out the top ten.

Danny Webb and Taylor Mackenzie enjoyed an equally close battle to the one at the front with the Mahindra rider taking 21st by 0.051s. Harry Stafford started next to Webb on the grid but crashed out at the first corner. 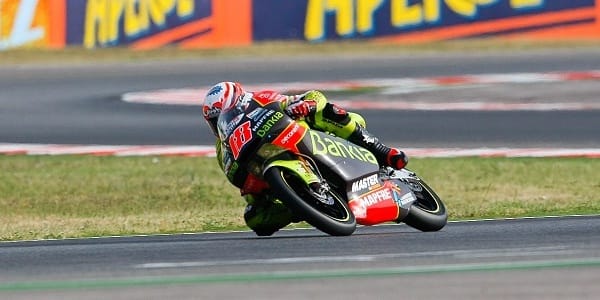 Riders Championship (After Round 12: San Marino)