In the days following Marco Simoncelli's tragic death in the Malaysian Grand Prix, the motorsport world has paid an emotional tribute to the flamboyant Italian star. And as MotoGP prepares to reconvene for the first time since losing one of its most popular stars this weekend at Valencia, it is now the turn of you, The Checkered Flag readers to pay your tribute to 'Super Sic'.

“I only got to know about Marco from 2010 when he came into Moto GP to ride for the Gresini Honda team.

It quickly became obvious that this man was a character, with his big hair, charisma and even when there were tough races he always had a big smile on his face which would light up a dull paddock.

It also became obvious he had lots of speed but was a bit wild as well on track, incurring the wrath of Jorge and Dani for incidents at Valencia and Le Mans respectively but after his incident with Dani he seemed to calm down and showed he could race hard but with controlled aggression as we saw with his brilliant ride to 4th after his ride through in Motegi and then 2nd in Philip Island after a very very good ride and had full respect for him then.

Tragically he was taken away from us when he was heading into the prime part of his career and in my opinion he would have been a future world champion.

I will miss his charisma, smile and all round good humour and also when he was on the track when he would put you on the edge of 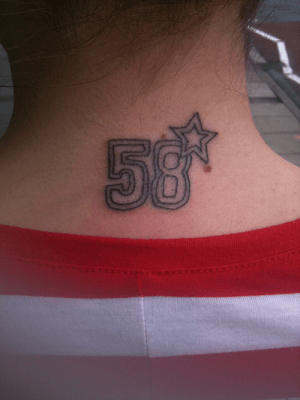 Proof, if it was needed, how much Simoncelli meant to the fans, courtesy of Bethany Andrews

your seat. His death will leave a big hole in Moto GP and will take a long time to get over this tragic death.

You will always be remembered and in your hearts #58.

“My interest in bikes has increased a lot recently and it comes as no surprise that Simoncelli caught my attention and soon became my favourite rider. His death has affected me in ways I wouldn’t have fathomed so two days letter I got my Sic tattoo. Ciao Marco and thank you.”

“Marco was a fantastic rider to watch, his elbows out style was easy to admire and I often took his side in the off circuit arguments.  He was quick and gutsy and an inspiration to all motorsport fans and competitors.  His fun filled nature is something everyone could learn from, to have such a star taken away from the world before his talent was truly rewarded is shocking, my best wishes go out to Marco’s family and friends at this time as I understand the grief they feel through the experience of losing my close friend this year in a similar incident, RIP Marco.”

“I met him and his mother at both the laguna seca and indy races the past two years.  We all loved him and will miss him more than any of truly know.  I believe he was on his way to dominate the 1000 cc class as his size was no longer to be a handicap.  We have so many memories to keep his presence among us for a lifetime. He was such a nice guy, really. He was our favorite, he will be deeply missed.”

“wot a shock we  have lost such a great racer marco, he was such a joy to watch and becoming a future champ! He may have been involved in some trouble in the past with other riders but that's racing, no racer means to bang into other riders and marco never complained about others just tried to make his way up to the top step. RIP we will never forget you.”

“Rip marco, you are a talent out on the track that will be truly missed. Much too young. Sympathy to marco's family and friends. Thinking of you all, be strong and be there for each other. Words cannot describe the shock and disbelief. Keep riding mate.”

“What a tragic and horrific end for a bright shining star of the Moto circuit. He was truly going to be a great follow up for Rossi over the seasons to come and will be sadly missed for his love of life and live-life-to-the-full attitude. RIP Marco and thoughts with all his family x”

“Sic was there greatest thing to happen to moto gp since Rossi made world champ. He will be missed by so manyâ€¦ family, friends, fans, everyone and anyone. The love for Marco is huge.”

“RIP Marco. We watched you here in Canada and really enjoyed your vibrant personality. Condolences to your family.”

A huge gathering of fans, riders and personnel attended Marco's funeral in his hometown of Coriano

Ewan Marshall (@EwanMarshall): “It’s a shame Simoncelli has lost his life in such a horrific way. A man with a colourful future ahead.”

Tracey Ann Daniels (@MotoGP_Tracey): “Only the Good and the Brave die young, be blessed you are classed as both! Enjoy the female angels as I know u will! #CiaoMarco Love Tracey”

Glen Doherty (@GlenDoc): “Thoughts go out to Marco, family friends team and colleagues. He was a shining light in #motogp and a big star of future RIP Marco.”

Chris Reeves (@Thebetrayed91): “#RIPMarcoSimoncelli A true character and racer who brought a new light to MotoGP, u will be greatly missed.”

Lorraine (@Lorry07): “#SmilingForSic.. I’m trying but it's hard :( we love you Super Sic!! you were always smiling! Always in Our HEARTS!! Xxxxx”

Marta Contador (@Marta_McFlyer93): “Like a shooting star, flying across the room, so fast so far, Super Sic, you were gone too soon :'( #SmilingForSic”