After a tense climax to the Britcar season Topcats Racing won the three hour 'into the night' race around the Brands Hatch Indy circuit, Henry Fletcher and Owen O'Neill piloting the orange and grey Marcos Mantis to victory, securing the Class Three championship in the process.

The race – the final event of the inaugural British Endurance Championship – drew a entry devoid of the Class One Moslers and Ferrari's – Calum Lockie and Paul White already having wrapped up that class after the Snetterton round. That should have left the way clear of a pair of big hitting Class Two cars.

Barwell Motorsport gave the new look GT3 Ginetta G55 is BEC debut with drivers Mark Lemmer, Ben Butler and Tom Kimber–Smith, with Le Mans LMP2 champion Kimber-Smith putting the car on pole position. However, when the field lined up for the 3:30pm start and pulled away for the first of two warm-up laps around the 1.2mile circuit, Kimber-Smith was forced to pull off with a broken driveshaft. The failure knocked the team out of contention for the win, but the car returned to the track just 24 minutes into the race to continue the development work on Ginetta's racer.

In turn their failure gave the perfect opportunity to Aaron Scott and Craig Wilkins to end their championship winning season with the overall win that had evaded them through the rest of season. Under the BEC scoring simply by taking the green flag the GT3 Racing team had secured enough points to make certain of the overall title.

Over the opening laps Scott pulled a lead out ahead of Jay Shepherd, starting the matt black Porsche of Neil Garner Engineering. But Scott, like Kimber-Smith before him was to find the overall victory taken away from him by a technical problem – in this case a fuel pump problem – that allowed Shepherd into the lead at Surtees after the Viper spluttered along the Cooper Straight.

When Scott brought the Viper back to the pits the way was paved for one of the best races of the season. Shepherd led the race from Optimum Motorsport’s Joe Osbourne, the two Topcats Racing Marcos, Fletcher's Class Three example leading Neil Huggins aboard the Class Two car and the Eurotech run Porsche started by Gareth Jones.

The tight confines of the Indy circuit lent an extra element to the battle for the top five, Shepherd starting to lap cars just 15 minutes into the race, allowing Osbourne to catch up to the rear of the Porsche. More traffic – 20 cars were spread around the track – allowed Huggins – released from a prescriptive fuel strategy after a very early safety car – to catch the lead battle in the no.26 Marcos, and then work his way into the lead, Osbourne following into second when Shepherd ran wide at Paddock Hill Bend. 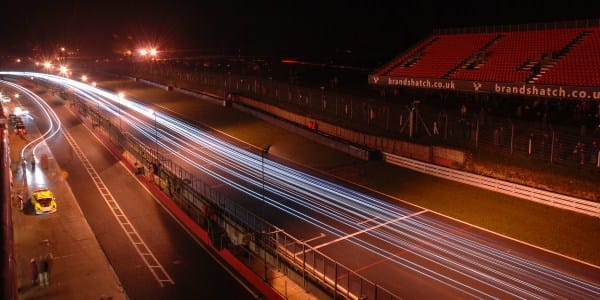 The tight 1.2mile Brands Hatch Indy circuit made the tight racing of the first possible, as traffic was a constant

The battle during the first hour was interrupted by further two safety car periods, the first when Tim Saunders pulled his Production Honda Civic off at Graham Hill Bend with the left-front wheel hanging off, the second when Graham Bryant span off at Clearways in a non-Topcats Marcos.

The pair of hiatus bunched up the lead battle further. Despite an off at Graham Hill Bend earlier in the race Gareth Jones moved past Henry Fletcher into fourth place as Huggins and Osbourne broke away with the third, fourth and fifth battle mired further back in traffic.

The fuel economy shackles had been put back on Huggins, as he defended from Osbourne as the far quicker Barwell Ginetta tried to take back one the twenty-odd laps it lay behind the lead.

“I let [the G55] through pretty easily because he was so far back,” Osbourne told The Checkered Flag after his stint. “I let him through to try and make a move on the Marcos for me to try and make a hole for me, but I think Tom Kimber-Smith was struggling to get around that Marcos. I think he had his defensive head on today, and fair play he did a bloody good job , I couldn't get around him and it was all clean. Kudos to him.”

Huggins' defensive head he said was down to him going as slow as possible, while still keeping the chasing Osbourne behind.

Both cars however, were not to figure in the race for lead after the opening stint, Osbourne handing the car to Lee Mowle just after the hour – the Optimum crew also held captive by the need for two stops to cycle third driver George Murrells into the car.

Huggins' – and the no.26 Topcats crew's problems began with a number of offs late in his stint that turned out to be down to a leak in the power steering hose dumping fluid onto the front tyres. Jon Harrison initially took the car over from Huggins' but returned to the garage soon after for a longer stop to repair the problem.

Jay Shepherd led early on for Neil Garner's team, and Rod Barrett chased the lead in the closing hour

Their stops and problems gave the lead back to Jay Shepherd, leading from Henry Fletcher as the two men tried to stretch their fuel to the longest extent.

Fletcher took the lead on track on lap 96 and the leaders made their stops either side of the two hour mark. Shepherd just before, handing over to Rod Barrett and Fletcher soon after, Owen O'Neill taking over the car.

The exchange gave the Topcats car a commanding 50 second lead, but one that was steadily eroded, the team still with concerns over the ability to make it through the final hour. Topcats team principal Warren Gilbert went so far as to kindly tell the Porsche team to slow their man down, such was his worry. It was, as Henry Fletcher said after his two hour stint “win or bust”.

The Topcats man summed up the strategy; “I was going to run it dry full stop but it didn't cough or anything but the fuel reading was on zero. It was empty.”

He recounted; “The start was, I didn't know quite what would happen. We couldn't run the race pace of the others, but I could run 49s which seemed to be what the others were running. I thought they might go a little bit quicker but obviously the Viper pulled off and then it was down to us. We tried to go for fastest lap, which we lost by four tenths to the Porsche. But we came here to win so I was pushing, pushing, pushing, pushing – there was nothing else to do but try and go flat out.”

Despite their greater pace in the latter stages of the race there were fuel concerns for the Hawthorns/Neil Garner team further towards Clark Curve up the pitlane, a half churn of Sunoco waiting – purely as a precaution – at the front of the garage.

Just when battle – almost certainly a brief one given the speed differential in favour of Barratt – was about to commence a spin from the Porsche driver dropped him to 28 seconds from the leader, handing victory to the jubilant Topcats crew, though the lead was again sliced to just 13 seconds by the checkered flag.

The Jones trio – Gareth, Morgan and Philip claimed third overall on an all Class Three podium ahead of the Invitation Class Two Optimum Ginetta, the crew preparing for the Dubai 24 Hours with a succession of late season Britcar runs.