After a weekend largely dominated by Porsches – save for the Aston Martin win in the first race – Duncan Cameron overcame two 997s to record the first win of the season for MTECH and the Ferrari 458.

Starting the car from fifth place on the rolling start Cameron's teammate Matt Griffin was one of many drivers surprised by Joe Osborne's dive down the inside into turn one. In one move he passed Griffin, Michael Caine's Motorbase Porsche and Jonny Adam's race one winning Aston, the pass on Adam completed around the outside turn two as he was briefly held up on the inside line by Richard Westbrook.

After his electric start Osborne started to fade becoming the head of a train of cars containing most of those he had jumped at the start. Caine, Adam and Griffin concertinaed up behind the Porsche, Allan Simonsen and Tim Harvey closing in on the tail. Caine escaped into third place, his pace pulling away from Osborne – 1.6 seconds in a single lap – proving that the former GT4 champion was holding up those behind.

Adam searched for a way around the Porsche with no luck, allowing Griffin to down the inside of turn one with a diving move of his own. He sailed past Adam before running slightly wide through the right hander, pushing Osborne wide leaving a space of an opportunistic Adam to pull alongside exiting turn two and ahead on the short straight towards turn three.

The Porsche 1-2-3 that had developed at the front had fallen into comfortable gaps, Nick Tandy, who led easily into turn one at the start of the race steadily pulling away from Westbrook, who in turn was pulling away from Caine.

With a slow stop as Caine handed the car to Daniele Perfetti the no.11 crew fell back, dropping to fifth after all the pitstops had been completed. That had let Duncan Cameron up into third place, not that he knew that, as he told The Checkered Flag after the race;

“It was one of those where I didn't really know where we were in the race and I didn't want to ask but I could see when I left the pits there was a Porsche but it was a long way in front of me. All weekend we've not been good against the Porsches, they're massively quick in a straight line which round here seems to make a big difference so the first time I saw him the first time I saw him I didn't think I was going to catch him that quickly but within two of three laps I was on him and got past him relatively easily and then I could see another one and that was David and I though the same thing – maybe this is for third place so I'll push.”

“I caught him really quickly, I think I made 3.5 seconds on one lap which was a surprise. Compared to the Porsches we were really good on the brakes, hopeless in a straight line but then the Ferrari is just about the slowest GT3 car in a straight line at the moment, but on the brakes we were mega so I just went down the inside into turn seven and he didn't really put up much of fight. The last three of four laps of the race I was sitting there thinking 'I don't want to ask, I don't want to ask' so I sat and waited for the checkered flag out and when it came out for me I thought 'that's it P1.”

With Cameron out in the lead Perfetti was gaining on David Ashburn in second, taking three seconds out of the past champion to close in with to just three-tenths with only a few minutes in the hour left. Perfetti's drive after his lap one spin in the first race had made him one of the stars of the meeting, and now on Ashburn's tail he was pushing for second place – groping for an opportunity around the outside of the hairpin on both the penultimate and final laps, running wide on the final lap as the battling pair started their journey back up the hill.

Perfetti's last chance to claim second place came at the chicane, Ashburn taking the defensive line accordingly, forcing Perfetti into looking around the outside. While initially unsuccessful Perfetti might have been able to use the momentum from the wider line to pass into the final corner but a slide from Ashburn exiting the chicane brought him onto Perfetti's line, stopping the Swiss driver from gaining the necessary momentum and leaving the Motorbase driver in third place. 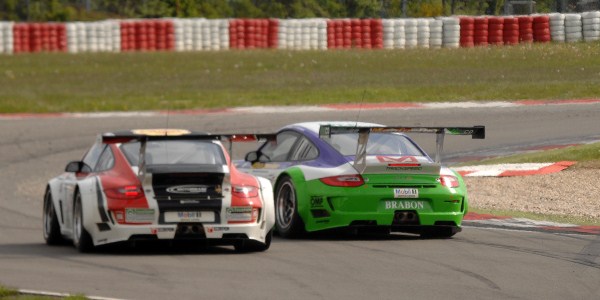 Ashburn and Perfetti battle and slide their way through the chicane on the final lap (Photo Credit: Chris Gurton Photography)

“The team did a superb job,” said Perfetti. “Michael did a great job and very had a very consistent car throughout the race which is what I think so of the other teams were struggling with. My pace was good at the end and I managed to make up a little bit more ground and in the end the Trackspeed car was giving me a hard time, he wouldn't let me through and we tried everything so this time round he won it, It was a good battle, we had fun and we both finished.”

After dropping behind the Ashburn/Westbrook combination in the pitstops and being passed by both Cameron and Perfetti in his stint Steve Parish brought the second Motorbase car fourth after co-driver Nick Tandy had led the entire first stint.

Jann Mardenborough was, again, the star for RJN Motorsport, driving the Nissan GT3 GT-R from tenth to fifth in his stint, passing the Trackspeed Porsches of Jon Minshaw and Steve Tandy, both of whom dropped out of the points, as well as Hector Lester and Charles Bateman.

The other position gained came due to a penalty for the Beechdean Aston Martin, Andrew Howard deemed to have crossed the white line at pit exit. He dropped to tenth, but fought his way back up to seventh place, passing Lester in the closing laps.

In the GT4 class the dominance of Jody Fannin, Warren Hughes and Team WFR was finally ended, though only – probably – because of an oil leak on the Ginetta G50. 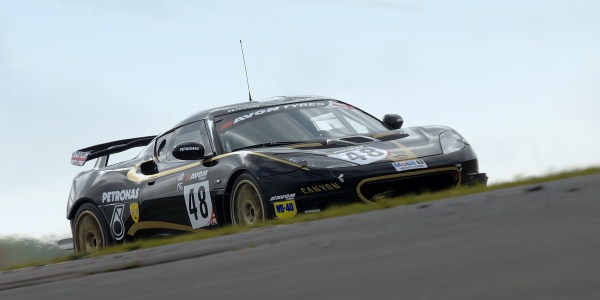 Hughes lead from pole position was the shuffled back to third in class by Phil Glew's Lotus and APO Sport driver Alex Osborne, who looked capable against the fastest drivers in the GT4 class, harrying Glew for several laps before falling back behind Hughes before the Team WFR entry fell by the wayside.

Glew handed the car to Sailesh Bolisetti with a forty second lead in class over the Century Motorsport Ginetta driven by Zoe Wenham, and though Wenham was able to cut the lead in half during their respective stints the Indian driver held on for a first class victory of the season for Lotus Sport UK.

“Phil had taken all the pressure from the other competitors when he was fighting it out in the first stint but when I got the car I worried I might have to fight out a bit too.” Bolisetti told The Checkered Flag. “But I saw myself with a forty second lead by the time I went out so I was more I had to keep the car straight and keep the mind cool and finish the race.”