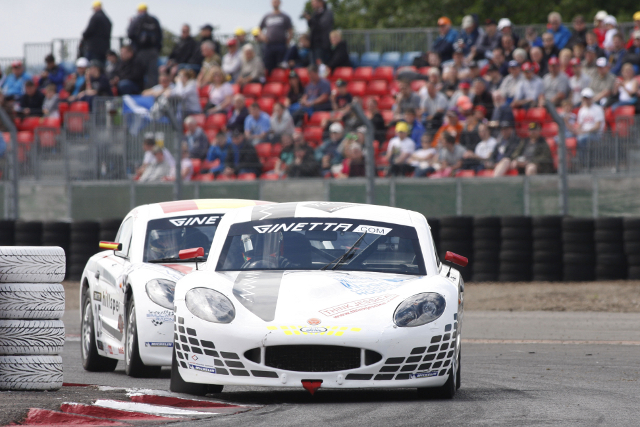 Sennan Fielding completed his perfect weekend in the Ginetta Junior Championship at Croft by taking victory in Round Ten, making it two wins from two pole positions to give him a two point championship lead heading into the summer break.

It was the championship leader heading into the race, Niall Murray, who joined Fielding on the front row of the grid at the start, however despite a good getaway, the Irishman couldn't force his way into the lead, with Fielding leading into Clervaux ahead of Murray, Charlie Robertson and Pepe Massot.

Fielding came under some early pressure from Murray, but the Douglas Motorsport driver was soon forced to defend from Robertson behind, allowing JHR Development's Fielding to edge clear and lead the remainder of the race en route to his third win of the season.

Despite Murray's best efforts, HHC Motorsport's Robertson was able to find his way past on lap five to take second, with Murray forced to settle for third at the finish. Massot crossed the line fourth, just ahead of JHR's Oliver Chadwick.

The main action during the race came in the battle for sixth place. Andrew Watson held the place early on, while behind Keith Donegan briefly got past Harry Woodhead for seventh on lap two, before Woodhead got himself back ahead at the hairpin on lap three.

A lap later Woodhead made a forceful move on Watson at the hairpin for sixth and a lap later the Irishman made a move back, with contact between the two spinning Woodhead round and sending Watson off onto the grass, dropping both down the field.

Benefitting from this to take sixth was Donegan, just ahead of rookie Tom Jackson and reigning Ginetta Scholarship winner Oliver Basey-Fisher. Scotsman Elliot Paterson took ninth, with Woodhead and Watson completing the eleven finishers, both suffering from front end damage.