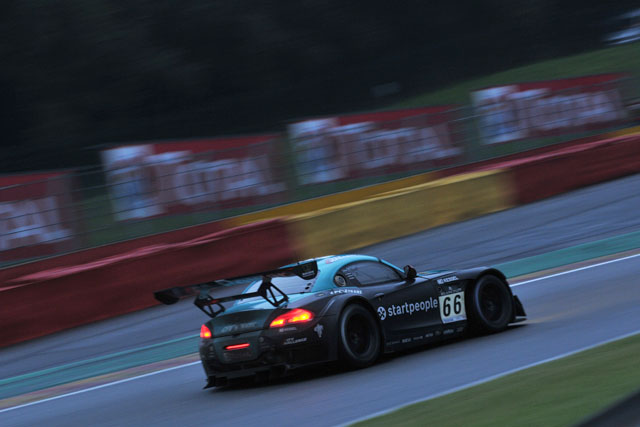 Rene Rast continues to lead the 2012 Total 24 Hours of Spa for Audi Sport Team Phoenix as the sun rose above the Belgian track to herald the arrival of Sunday morning.

The safety car count continues to rise, the Audi A5 now having been scrambled 13 times, the latest for Duncan Cameron's off in the MTECH Ferrari 458 at the top of Radillion, the car and debris blocking the route up the hill out of the pits.

The luckless showing by British GT Championship regulars was further continued by Beechdean, who lost a tyre at pit entry and have subsequently lost 16 minutes and counting of the time needed to fight back from their earlier delay.

Shortly after the half way mark Markus Palttala took his first stint in the #3 Marc VDS Racing BMW Z4, serving the stop-go penalty the team had worked their strategy to avoid in the quest for the points on offer at quarter and half distance. Needless to say the stop dropped down the previosu leaders, but only to third overall at the end of the 13th hour that included the penalty. However, they ended the 15th hour back in fifth place. The pair of Team WRT Audi run third and fourth with the Vita4One Racing BMW that took pole position fighting back into second position.

After a shuffle in Pro-Am cup with both the leader and second place teams at half way falling behind, the formerly leading Porsche falling to third in class and ninth overall, the #50 AF Corse Ferrari losing time with a ten minutes pitstop to end the 15th hour twelfth overall and seventh in class. Happily for the team the problems allowed the #51 and #52 Ferrari into 1-2 in class, but split by a lap of the 7km track

In the Gentlemen Trophy class – improving in the overall standings all the time thanks to attrition elsewhere – First Racing's Porsche and Bull Fight Racing's Dodge Viper are on the same lap, albeit with the Porsche a minute ahead on the road.

The #94 SpeedLover team look all but assured of Cup Class victory being the sole remaining competitive car in the class.