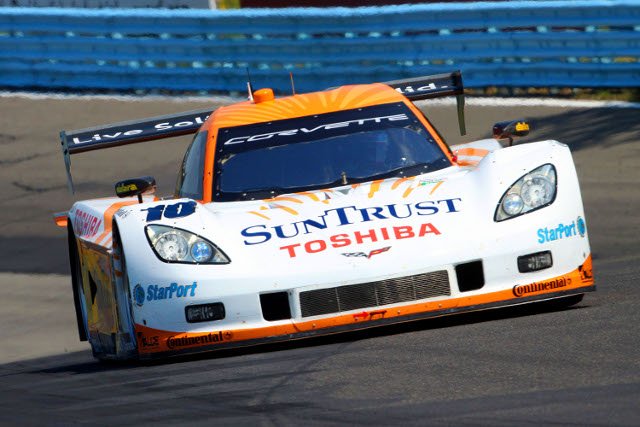 SunTrust Racing's miserable run in the Rolex Series continued with a fourth retirement in as many races coming in the Sahlen's Six Hours of The Glen.

A year on from setting the pole position and dominating the race Max Angelelli started the #10 Chevrolet Corvette DP from fourth place, though he fell back in a typically combative opening lap among the 11 cars contesting the premier class.

Angelelli started to fight back and after a caution period inside the opening hour the Italian driver tried to take a position from David Donahue at turn one. However, on his past the Action Express driver apparently light contact caused damage to the right-rear of the SunTrust car. The damage was fixed under the ensuring caution period with the Wayne Taylor Racing run team losing a lap to the leaders, Angelelli returning to the with a new rear bodywork section on the car.

The damage down in the contact was apparently minor by once Ricky Taylor took over the car from Angelelli the problems began to mount up. The American felt the car's suspension collapse climbing through the Esses causing “a huge moment” through the high speed turns before limping back to the pits for the team to replace the broken parts of the right-rear suspension before returning Taylor to the race, but now nine laps off the pace.

Taylor completed ten more laps before the team opted to retire the car, fearful that further damage lay unnoticed in the rear of the car.

“When we went back to take a closer look at the left-rear tire from Max's early incident, the wheel was completely bent, so that means it was a much bigger hit than Max seemed to think it was,” said Wayne Taylor. “We won't know until we get back to the shop, but the right-rear A-arm issue might have been a result of that. And if that's the case, who knows what else under the car might be cracked or broken. So, on this track in particular, it's not worth the risk trying to finish the race with a potential problem on our hands. It's a fast track. The best thing to do is to get us home in one piece and get ourselves ready for a very special race that's coming up next.”

That “very special race” is the Rolex Series' first ever race at Indianapolis Motor Speedway as part of the Kroger SuperWeekend on July 27. SunTrust Racing will – obviously – be looking to arrest the slide down the points' standings that has accompanied their recent poor form that has seen them fall 33 points down on championship leaders Memo Rojas and Scott Pruett.