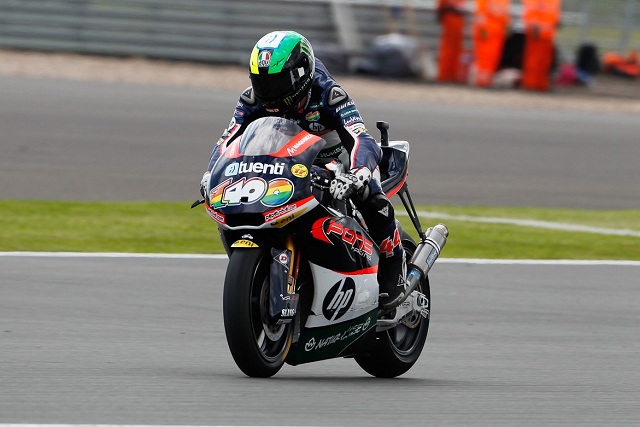 Pol Espargaro showed tremendous grit and determination to claim pole position for the Italian Grand Prix despite suffering an ankle injury in final practice. The incident in FP3 occurred at the San Donato corner when Espargaro was taken out by Johann Zarco who carried too much speed into the braking zone. The Frenchman was handed a 15 place grid penalty for his troubles.

The session had been dominated by Marc Marquez who first clocked a 1:53.016 before improving to a 1:52.438 on his next flying lap, opening up a six tenth advantage at the front. Espargaro, clearly riding on pure adrenaline, cut the advantage to a tenth of a second midway through but a seventh pole of the year was still looking likely for Marquez.

Besides a minor blip which took him into the San Donato gravel trap, things were running smoothly for Marquez but with seconds remaining, Espargaro produced a stunning effort to beat the championship leader by 0.069s, triggering joyous celebrations in the Pons garage.

Marquez was relegated to second with Johann Zarco, ironically, setting a 1:52.781 to go third but the penalty incurred from the morning will drop him to the back of the sixth row. As a result, the top three is completed by Andrea Iannone who looks the best bet for a home victory tomorrow.

Alex de Angelis will line up fourth for Forward Racing with Thomas Luthi and Bradley Smith alongside but the Briton ended his session in the gravel trap following a crash at the Arrabbiata curves, damaging his updated Tech 3 Mistral 610. The team's mood won't have been helped by Xavier Simeon doing even greater damage to his bike with an early spill.

Scott Redding delivered just in the nick of time to snatch seventh with Esteve Rabat and Takaaki Nakagami joining him on the third row while reigning 125cc world champion Nicolas Terol showed his best form in Moto2 so far and will start in the top ten for the first time. Gino Rea's debut season in the intermediate class is yet to hit those heights in dry conditions and he will start down in 25th tomorrow.