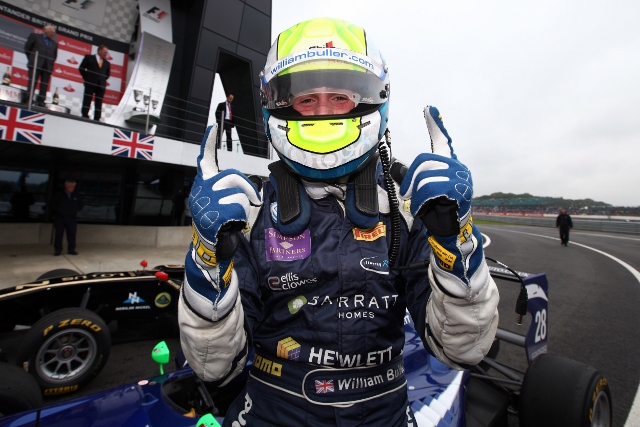 William Buller said after his stunning last-to-first GP3 victory on the morning of the British Grand Prix at Silverstone that his experience of racing in Britain meant he knew how to drive in such conditions.

The Northern Irishman drove to his maiden win in the category after gambling to fit slicks at the start – a decision that he said he called.

“First of all it was a great weekend for Carlin,” he said in the press conference after the race, with teammate Antonio Felix Da Costa having won on Saturday.

“The team really needed this, so two wins this weekend is great. It's really lifted the team, the whole atmosphere is great. I am so happy to be at this team.

“For the race, it was something special, coming from last to first. We had a bad day yesterday hitting two cars in the first corner and we didn't finish so we had to start from the back. So I called slicks and it was the right decision.

“I have had a lot of experience racing in Britain, so I know how to drive in these conditions. That experience helped me a lot. It was spitting on the grid and 14 laps is quite a long race. But I thought let's go for it and we did.

“I just had to stay with it for the first four laps and then we started picking them off. I didn't get the fastest lap which was a bit disappointing but I didn't push the last four laps because there was no point with the yellow flags. There was no point getting a penalty so I am very happy with everything. I am glad to get my first win in GP3.”

Buller was delighted to win on home soil, and said that three of the remaining four tracks on the calendar should suit him.

“Yes exactly the home GP for me and Carlin which adds to it and makes it more special,” he said. “We are all over the moon. The second half of the year is going to suit me more with my driving style with Hockenheim , Spa and Monza. Valencia we struggled but now in qualifying I should have been in the top three but it just didn't work out with the yellows. Our speed is strong and me and Antonio have been working well together, he's a good teammate. I'm a happy man!”

Buller explained that staying out of trouble when the track was at its wettest in the opening few laps was key.

“I had to manage it at the start and when you are trying to pass those on wets, they don't really want to let you past. But the speed difference is something else. Once the wets overheat, they just start to fall off. I just had to keep calm and keep my nose clean for the first four to five laps. I knew it would come to me.  I was pretty confident from the start of the race and I could see the clouds were passing. But in Silverstone you never know what can happen.”

Buller has been conducting a dual programme in 2012, combining GP3 with the Formula 3 Euro Series. While he has been a regular frontrunner in F3, a category of car he's already driven for the two previous seasons, he's struggled slightly for results in GP3. He explained however that his performance proved that he is getting the hang of GP3 and should be competitive for the remainder of the year.

“With GP3 it's my first year, I am really getting the car and tyres under me now,” he said. “I am starting to understand it as today I have proved, I am getting to grips with everything. It's basically just to win races and hopefully be in the top three at the end of the season.”

Conor Daly also started on slicks, and although he finished behind Buller in second he had to recover after dropping towards the back having started on the second row of the grid.

“Honestly, I was really unhappy with the decision to go on slicks,” said the Lotus GP driver. “I was shaking my head.

“When you are at the front you want to go with the majority of what everyone else is doing, but you know it was the right call. I never should have doubted the Lotus guys, seriously they really know what they are doing.  I think since I am not as high in the championship as my Lotus teammates, the team may have felt it was better to take the gamble with me on slicks.

“It was a good day for the championship in general since Mitch and Aaro didn't score. It's great to be driving for a team like that and well done to the Carlin guys. I know they are good from my time with them last year and it's great to see them fighting at the front with us.

“It was crazy at the beginning. Honestly I was driving like a bit of a nancy at the beginning just because I wanted to stay on track and hopefully being there at the end. I have to thank all of the other drivers for not running into me because I know I was quite slow.

“Once it started drying out, it was fantastic. The car was really good and the gaps were so massive, I never thought I couldn't make it up that much. I didn't even know where I was at the finish, I thought I was fourth or fifth and turns out I was second, so not bad at all.”

Looking forward, Daly hopes he can fight for the Race 1 win in Germany, having started the previous two race weekends with a grid penalty.

“So far I have no penalties for the next race so if I can get a Race 1 win that will be a good haul of points,” he said. “I need a good race 1 and race 2 together. I tend to have an average Race 1 and then we come back for the second race. Now we are in a good position to be able to challenge in Germany and I am just looking forward to it. I think we have wiped our slate clean after this weekend and overcome the penalty we had. We had a good first race and good today. I am ready to keep it going.”

Third-place finisher Patric Niederhauser led the way during the middle of the race after storming through from tenth on the grid, but was unable to resist slick runners Buller and Daly.

“I was leading for a few laps which was great,” said the Jenzer Motorsport driver, who won race two in Valencia.

“The race yesterday was a bit difficult as we had mixed conditions especially at the beginning. Today was a crazy race. At the start we thought to go on wets then we thought slicks, we were undecided but we made the right decision to go with wets. It was still very wet at the beginning of the race. 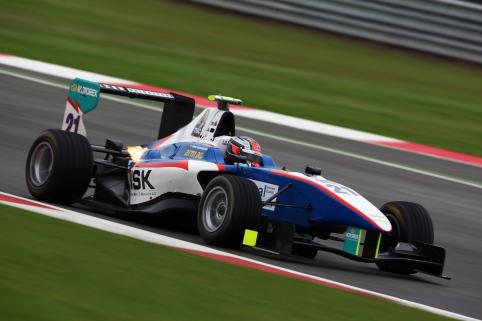 Niederhauser had looked set for a repeat of his Valencia win – Photo Credit: GP3 Media Service

“I had a good start but then I had a little contact with [Matias] Laine and I lost a lot of places. Soon after I moved up and made some overtakes and I realised I was very quick. I moved up near the top. I had a brilliant car at this point as I was much faster than the other guys. It was a bit of gamble but my team decided for me to stay out on wets and I think again this was the right decision.

“If you look to the other guys, they lost more than we did, for example you see what [teammate, Robert Visoiu] did, he also moved up a lot of places, another good call from the team. Congratulations to William on his win. After starting last, he had nothing to lose and made the gamble. And at the end he managed to win. For us it's a great result to make another podium because at the end my wet tyres were completely gone.”

The Swiss rookie is hoping for more podiums in the coming races, starting close to home next time out at Hockenheim.

“Well I have not raced at Hockenheim even though this is the race track closest to my home,” he explained. “But I think we have had some difficult races this year but there will be races I know much better ahead of me. I am feeling very positive about the next races. I think we will get some more podiums.”