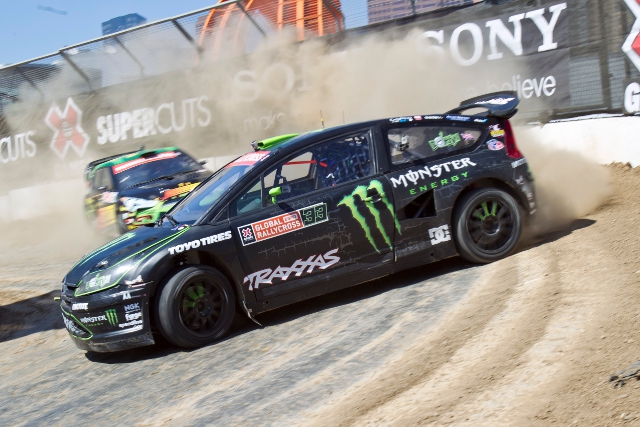 Four British drivers went to X-Games 18 with hopes of taking the gold medal, but come Sunday, none could garner a podium finish. Liam Doran was the best placed one of the British contingent in fifth, while last minute stand-in David Higgins and front-row starter David Binks were both forced to retire. Meanwhile, after a controversial collision with fan-favourite Travis Pastrana in his heat, Andy Scott was eliminated in the LCQ.

After serious accidents had befallen Toomas Heikkinen and Marcus Gronholm, Liam Doran elected not to compete in practise until it was clear the track was safe.  Having thus failed to set a time, the Citroen C4 driver had to start at the back in his heat.  A stalled engine only made matters worse, but the 25 year old was quickly able to join the battle for second against fellow Monster Energy athletes Ken Block and Dave Mirra, with Samuel Hubinette far ahead in a dominant lead.  But a puncture ruled out any chance of passing Block, which meant Doran would have to negotiate the LCQ. However, this he won with ease, putting him on the back row for the final.

Despite contact with Hubinette and another puncture, Doran would finish fifth, a credible result considering the travails of his weekend.

“I am pleased with where I finished considering the puncture I had from the early stages of the race,” the Citroen driver said. “After winning a gold here last year in Rally I wasn’t going to be pleased with anything less than another Gold but there was some tough competition this weekend including 8 times WRC champion Sebastien Loeb.

“The team did a great job with the car and by the time the final came around I knew it was just a case of staying out of trouble and driving smooth. I have had some great support from media and fans here in LA this weekend and would like to thank my sponsors for their support, Bring on 2013!”

After Heikkinen's forced withdrawal, David Higgins was a late entry in a fourth Subaru Impreza.  Higgins, who a three-time Rally America champion, who also leads the series this year, acquitted himself well in Bucky Lasek's spare car and overalls, although his admission to the final was somewhat fortuitous.  Indeed, it owed much to Andy Scott, who punted Travis Pastrana into the wall at the first corner in Heat 4, earning the Scotsman a disqualification and rendering Pastrana's Dodge Dart – an expected contender – beyond repair.

This meant that fellow Briton David Binks was also fast-tracked to the final and because there was no restart, Binks was declared the heat winner due to his superior qualifying pace over Higgins. As a result, Binks' purple Fiesta would start on the front row alongside superstars Sebastien Loeb, Hubinette and Sverre Isachsen.

Scott's troubles continued in the second LCQ.  A jump start meant he was put at the back of the grid, leaving him at a distinct disadvantage to Rhys Millen, who claimed the win, thereby eliminating the Saab driver.

“It was naturally a very disappointing end to the weekend after such a promising two opening rounds in Charlotte and Texas,” Scott said. “In practice and seeding we managed to get some good laps in and I was very happy with the pace, so going into the heat I was feeling pretty good.

“I didn't get the best start, but then picked up momentum, and as we entered the first corner Travis braked earlier than I expected, and I ran into the back of him. It was purely a racing incident, but nevertheless not the way I wanted to start my X Games campaign. We managed to get the car repaired just in time for the Last Chance Qualifier, but sadly it wasn't enough to get through to the final.”

In the final, Binks got an average start from the outside of the front row, but found himself squeezed out at turn 1 and dropped to fourth behind Ken Block and Tanner Foust.  Nevertheless, he was running competitively and in podium contention until he was rudely punted from behind by Millen, the contact putting him out of the race.

Manxman Higgins was never a factor in the final and ran at the back of the field before pulling off with car trouble when he was about to be lapped.

By Vince Pettit
3 Mins read
Sébastien Loeb joins the FIA World Rallycross Championship for 2016, we take a look at his previous RX outings.