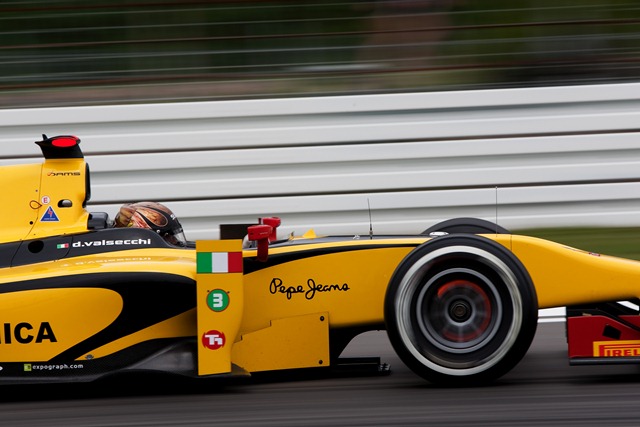 Davide Valsecchi posted the fastest time ahead of GP2 title rival Luiz Razia in a practice session at Hockenheim that was disrupted by a heavy crash for Giancarlo Serenelli and then rain.

Lazarus driver Serenelli ran wide and off track at the Mobil 1 Kurve, before spinning across the track and hitting the barrier at high speed. The impact damaged the rear of his car heavily, but the 31-year-old was able to get out of his car.

That happened as rain started to fall, and when the session restarted with about six minutes to go the track was wet enough that times would not be improved upon – with some drivers opting to go out on wet tyres.

Valsecchi was 0.120 seconds quicker than Razia, who is six points ahead of the Italian veteran in the standings.

Esteban Gutierrez, winner of the last two feature races, was third – the same position he holds in the points standings.

He was just ahead of Stefano Coletti, while Giedo van der Garde was fifth. Fabio Leimer was sixth, 0.005s behind van der Garde. Seventh was James Calado, who like Lotus GP teammate Gutierrez will have a ten-place grid penalty for the feature race.

Fresh from his mileage in the Marussia F1 car at Silverstone last week, Max Chilton was eighth quickest, with Marcus Ericsson and Fabio Onidi completing the top ten.

The Barwa Addax pairing of Josef Kral and Johnny Cecotto were 11th and 12th, the latter having a spin at the first turn early in the session. They were ahead of Tom Dillmann, who returns at Rapax having been forced out for the last two rounds. Nigel Melker, Jolyon Palmer and Nathanael Berthon were next up, while Felipe Nasr in 17th was the last man within a second of his DAMS teammate Valsecchi.