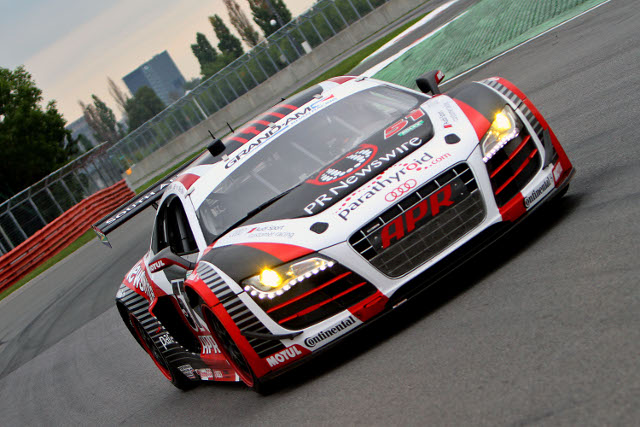 Despite enduring an eventful race, APR Motorsport enjoyed their strongest result of the Grand-Am Rolex Series season so far in Montreal.

The Audi R8 took its first top ten finish to date, eventually finishing ninth. Dr. Jim Norman and Dion von Moltke shared the driving duties at Montreal last weekend on Grand-Am’s only visit of the season outside of America.

Jim had a strong start to the race and avoided the carnage on the first lap, but later in the race Norman was unlucky to be hit from behind that damaged the Audi R8 Grand-AM’s suspension, and a subsequent caution period allowed von Moltke to take over at the wheel.  The car was in twelfth position in class at the time of its pit stop.

“We were hoping for a better result this weekend in Montreal,” said Norman. “But the big curbs really rewarded the Camaro, and the long straightaway rewarded several other cars more than ours. Even with the great driving of my teammate Dion, we see that there is still work to do before we get our first podium.”

Once in the car, von Moltke was able to make some progress in the GT field and was chasing down a Mazda RX8 in the closing stages. Time was against APR Motorsport however, but the team were still happy to take the car’s best result of the season on the tricky circuit.

“It was a really tough race as Montreal is a very mentally demanding race track,” said von Moltke. “You really have no room for error and for the last 45 minutes I was pushing like it was qualifying to close the gap to the Mazda in front of us.  I was able to get right on his rear bumper on the final lap but I just used up the tires too much trying to get there that I had nothing left to really challenge him through the final few corners.  Once again our guys were awesome in the pits which really allowed us to finally crack the top-ten.”

von Moltke also praised the efforts of his team mate as APR Motorsport continually improve the new for Grand-Am Audi.

“As a team we are finally hitting our stride and working together great,” he said. “The last two races Jim has really elevated his game and is really preforming well, I think we are starting to get the best out of the car as drivers and as a team. We are looking forward to Laguna Seca!”

“We have made tremendous progress this year developing the Audi so it is competitive under the Grand Am rules package,” Norman concluded.

“The team has been working very hard to find every possible way to make the car handle better and thus move up the time sheets. We are back to work and expect an even better result at Laguna!”