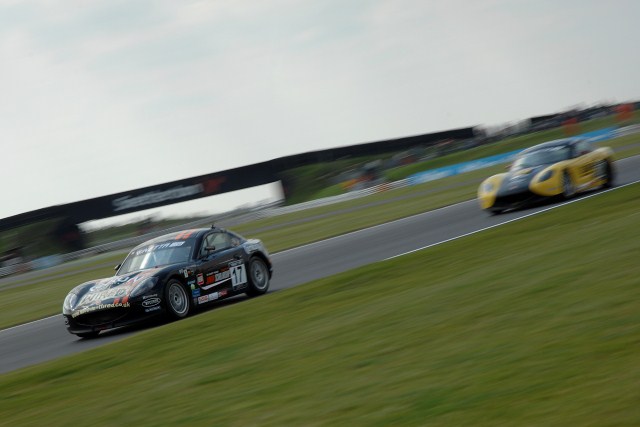 Oliver Basey-Fisher enjoyed a memorable first race meeting at home circuit Snetterton as he was cheered on to a top six finish by over 300 guests.

The 17 year old, who lives just 40 miles from the Norfolk-based circuit, was hoping for a strong run on home tarmac as the Ginetta Junior Championship returned from its seven week summer break.

The weekend started superbly for the teenager, with Friday practice seeing him finish third overall for the day, having topped the timesheets in the morning session. He couldn’t quite match the pace in qualifying though, putting himself seventh and eighth on the grid for the races.

The Century Logistics-backed driver was shuffled back to eighth place early on, but benefitted from contact between rivals ahead to sweep in to the top six. Although he lost ground to some recovering championship contenders, Basey-Fisher benefitted from more incidents ahead to come home in sixth.

The second encounter wasn’t quite as fruitful though. Pushed back to tenth early on, he fought back into ninth but was unable to gain any further ground, finishing ninth. The results leaves him still ninth in the driver standings, but he is now just 16 points off the championship top eight.

“It’s been incredible this weekend with all of the guests and sponsors supporting me trackside”, said the Silverstone Ginetta Junior Scholarship Winner, “It all adds a bit of pressure but I’m quite happy with my first ever run at Snetterton and I’m really grateful for the support. I think we lacked a bit of top speed in the races but it’s still been a positive weekend and nice to be back in the top six.”

“I knew I was quick this weekend”, he added, “I was fastest in practice on Friday, which was great, and everything seemed to fall into place. Qualifying didn’t go quite how we wanted it to but I think that was just down to a lack of a tow down the straight really – you need that at Snetterton. I’m pleased to have scored two good results but I think we could have had more if qualifying had been better.”

By Maurice Henry
5 Mins read
Maurice Henry rounds out the 2021 season and looks ahead to 2022.