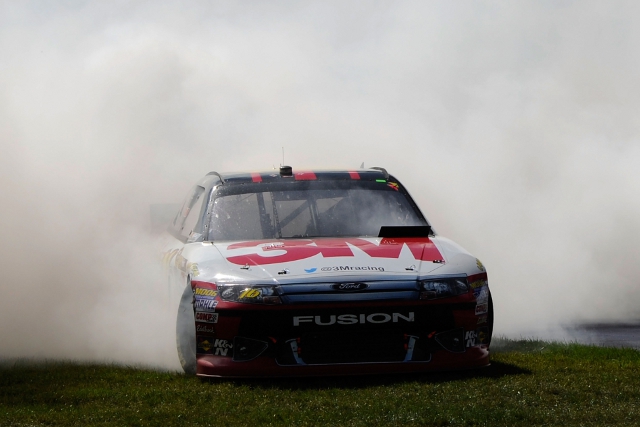 Greg Biffle held off Brad Keselowski to score his second victory of 2012 at Michigan International Speedway, although he had Jimmie Johnson’s engine to thank for letting go just five laps from home.  Johnson’s fourth points scoring win of the season looked a mere formality after he wrested the lead from Keselowski on lap 190, but his brilliant drive from the very back of the grid – due to an unscheduled  engine change after qualifying third – was to be without due reward.  Biffle leapt at the opportunity, and was able to resist the challenge of Keselowski and Kasey Kahne in the green-white-chequer finish to put himself back in the points lead.

With the Chase not far away, Biffle knows that a good-run in can only stand him in good stead for the crucial 10 race stretch which will determine the outcome of the championship.

Second-placed man Keselowski corroborates with the more commonplace view that Johnson remains the man to beat, but the Penske Racing man certainly won’t go down without a fight.

“The 48 [Johnson] might be the favourite for the championship, but we’re not going to roll over and just let them have it,” Keselowski said. “We’re doing everything we can do, and we nailed it on that last green-flag sequence. Although we might not have the most speed, we’re not giving up. We’re going to keep them honest through this Chase. That’s our goal.”

After such cruel luck, a heartbroken Johnson understandably declined to speak to the media.  However, the five-time champion can at least take solace from the fact that he was not the only one to suffer with engine maladies.

Needing a good result to seal a spot in the Chase, Jeff Gordon was only able to complete 167 laps, leaving him marooned down in 28th place, while Tony Stewart fared little better, with just 109 laps complete and a 32nd place finish.  But while Stewart’s three wins should guarantee him a spot in the Chase, Gordon’s solitary win at Pocono may not be enough unless he can add to it in the closing three races.  For the four-time champion, the net is closing in fast.

The same can be said for Biffle’s Roush-Fenway Racing team-mate Carl Edwards, sixth at Michigan, whose consistent approach may not be enough to make the Chase. Edwards is still without a win this season, and although he is 12th in points, Ryan Newman would still take the last spot in the Chase by virtue of his victory at Martinsville on April 1. With just Bristol, Atlanta and Richmond left on the schedule, there is not realistically enough time to overhaul Denny Hamlin, the current incumbent of 10th place, meaning Edwards will have to go for broke for a win.  Kyle Busch and Marcos Ambrose, each on a win apiece, will likewise be going all out for victory, Ambrose even uncharacteristically wrecking Regan Smith en route to a fifth place finish.

“I feel terrible for him, I didn’t mean to get into him,” the apologetic Australian said. “I got down in there and he came off my side of the car and I was trying to get out of there for him and just caught him on the way past. I feel bad for him. You can’t take it back, all you can say is sorry.”

A scary crash for Mark Martin dominated the headlines after the race.  Despite not having won since 2009, the 53 year old veteran looked comfortable out front – having led every lap after qualifying on pole for the fourth time this season – and was enjoying a small lead over Kasey Kahne.  On lap 64, the two were coming to lap Bobby Labonte and Juan Pablo Montoya when Labonte spun.  Montoya escaped unscathed, but as Martin tried to slow down to avoid an accident, he was rammed from behind by an unsighted Kahne.

Both cars spun across the grass, and while Kahne was able to get going and finish a remarkable third, Martin was not so lucky.  His Michael Waltrip Racing Camry slid down pit road, before impaling itself on a protruding barrier, which destroyed the left-rear quarter behind the driver’s seat, where the fuel cell is located. The heavy impact stopped the car dead in its tracks, and fuel leaked out from the ruptured tank, but thankfully fire crews were quickly on hand to prevent the oil igniting, and Martin was able to clamber free of the wreck, in the knowledge that he had been very lucky.  NASCAR will surely look at the incident to ensure that there won’t be a next time.

“That was a pretty freak angle that I got at that,” Martin said. “I’m not sure what you could do. It could have been really bad if I would have got in that hole a little deeper where it caught me in the door instead of in the crush area back there.

Montoya was later responsible for punting Joey Logano into the wall. His third sub-30th position finish in the past four races has now killed off any obscure hopes Logano had of ending up in the Chase, and giving himself a leg-up in the ongoing contractual negotiations with Joe Gibbs Racing, the most likely destination for Matt Kenseth to end up in 2013.