Dino Zamparelli Blog: The Story So Far – (With a clichéd title)

Hi I’m Dino Zamparelli and I am currently racing in the FIA Formula 2 Championship.

In a racing nutshell: I won the 2008 Ginetta Junior Championship aged 15 and the 2011 Formula Renault BARC Championship aged 18. I was chosen to become a BRDC Rising Star in 2008 and in 2011 I was nominated for the McLaren Autosport BRDC Young Driver of the Year Award.

My racing career started out in the most typical fashion, go-karting. A quick thought, why does no one ever use the ‘go’ in front of karting anymore? Karting on its own sounds a bit cooler, granted, but you can’t beat a bit of old school. Anyway, I learned all that I needed to learn in Karting and then moved to car racing in 2008. (There I am aged 6 in a kart) 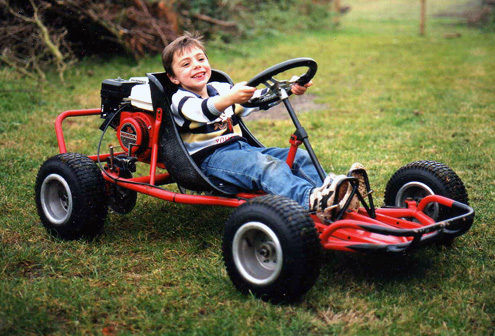 Ok this next paragraph is pretty bigâ€¦but I have condensed 4 years of racing into 19 lines. That’s good going, come on?! Read it quickly, here we go…

Armed with more aggression and more hunger, I duly took the title with 4 wins and 8 podiums out of 12 races. From there I was nominated for the McLaren Autosport BRDC Young Driver of the Year Award, where I was able to sample a 500 BHP DTM car, an FIA F2 car and the mightily impressive McLaren GT3 MP4-12C car. Despite pushing to the max, I unfortunately didn’t win the award, but just to be involved was a special highlight for meâ€¦especially after the year out in 2010 and seeing as I only had 12 races in 2011, I wasn’t too despondent! I woke up one day in January 2012 and realised I needed to attain sponsorship in order for me not to replicate the dry 2010 season.

I worked incredibly hard in the coming months and made it onto the F2 grid at Silverstone. I had a strong start to the season and constantly picked up solid points scoring positions. I had my fair share of bad luck, like for example when my left contact lens fell out in one of the races. But I’ve also had some good luck, like when I managed to dodge a crash at Spa in the wet. I put that video on YouTube and it went viral with 800k views in just over a month …but it wasn’t until mid-season at Brands Hatch where I picked up my first Formula 2 podium!

So here we are – I’m now in the middle of a 5 week break in the FIA Formula 2 Championship. I have been improving dramatically all the way through the season and like I mentioned have just picked up my first F2 podium at Brands Hatch. The most difficult transition from Formula Renault BARC to F2 has been trying to learn the foreign circuits in a couple of test sessions on the Friday whilst still learning the F2 car! I have been getting more and more comfortable with the car and feel like I’m finally starting to get on top of things.

We have just returned from Paul Ricard in France for the 11th and 12th rounds. Once again I was in the hunt for podiums showing strong speed. I finished 4th in race one and 6th in race two. Although I didn’t quite get the podium, I’m happy as for once the speed was there despite not having ever been to the circuit before. I was right with the leading pack and very close to being further up the result sheets.

Watch me next time; I’m on the hunt for that first win…

By Paul Hensby
2 Mins read
Callum Ilott hopes Ferrari give him opportunities to run in free practice sessions in 2021 as part of his role as reserve driver.
Formula 1Formula 2

By Paul Hensby
2 Mins read
Jack Aitken wants to build on his 2020 with Williams and have an increased role with the Grove-based team that gave him his Formula 1 debut in the Sakhir Grand Prix.
Formula 1Formula 2Formula 3Formula 4

By Paul Hensby
2 Mins read
Bob Fernley will replace Stefano Domenicali as the Head of the FIA’s Single-seater Commission from 2021.