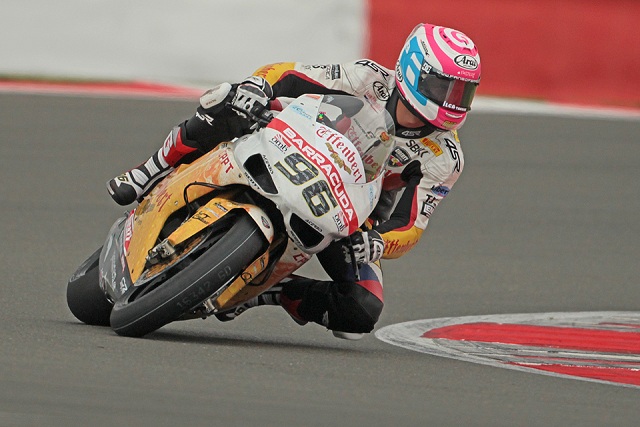 Jakub Smrz left it until his final lap of the afternoon to take pole position for tomorrow's races at Silverstone, denying Leon Camier and Crescent Fixi Suzuki a dream result on home soil. Thanks to the predictably unpredictable British weather, the Superpole session was run in wet conditions, producing a mixed-up grid.

The first session claimed the scalp of championship leader Max Biaggi but in truth, the Aprilia rider was fortunate to even get this far. Biaggi was sixteenth quickest in the two qualifying sessions and the last man through to Superpole but a shower late in the second session rescued him when Niccolo Canepa was on a lap likely to eliminate him.

Biaggi wasn't on pole position pace at any stage during Superpole and ended up a disappointing eleventh but a number of other big names struggled too. Jonathan Rea's 100% record of making it through to the final session was halted, bringing him back down to earth after his Suzuka 8 Hour victory. He'll start one place ahead of Biaggi in tenth.

The Kawasaki team which have dominated Superpole all year courtesy of Tom Sykes were looking competitive again but this time Loris Baz was the man setting the pace. The French youngster was fastest of all midway through SP1 but he undid all his hard work with a highside at Woodcote, leaving him powerless to prevent others knocking him all the way down to ninth. Rea and Biaggi will start alongside him with John Hopkins, last year's polesitter here, completing the third row.

Maxime Berger was also knocked out in SP1 with the Frenchman down in thirteenth while Eugene Laverty will have to go some to match his double-podium of twelve months ago, starting all the way down in fourteenth. Michel Fabrizio and Chaz Davies round out the fourth row with the luckless Welshman undone by a technical problem on his ParkinGO Aprilia.

More rain fell prior to SP2 and the extra surface water seemed to having an effect as Tom Sykes and Davide Giugliano both had separate high sides at Farm. Carlos Checa led his teammate in an Althea 1-2 in the first session but he wouldn't be starting from the front either after straying onto the slippery kerb exiting Woodcote and dropping his Ducati.

With three likely pole contenders out of the way, Leon Camier set out to seize the opportunity and went fastest two minutes from the end, three tenths ahead of Checa. His time of 2:21.623 remained unbeaten as time expired but Leon Haslam took over by a hundredth of a second on his final lap, making the most of the best track conditions.

Camier was also on a charge and quickly regained provisional pole, taking three quarters of a second off his compatriot's time. BMW's challenge ended as Marco Melandri failed to do better than sixth but a pair of Ducatis were still threatening the Suzuki out front. Sylvain Guintoli, making his return for PATA Racing after his unceremonious sacking by Effenbert Liberty, went third ahead of Haslam but Jakub Smrz ensured his former employers would start from pole with a 2:20.810, three hundredths quicker than Camier.

The three men to crash in SP2 will line up on the second row with Davide Giugliano fifth ahead of Marco Melandri and Carlos Checa with Tom Sykes down in eighth, his lowest grid position of the entire season.