The starting point for all 24 hour races – theoretically – is the 24 Hours of Le Mans, now the centrepeice of the FIA World Endurance Championship. Unlike its French inspiration this weekend’s Britcar 24 Hours sits not as the lynchpin of the championship it draws its entries from, but a standalone headline event.

With no championship points on offer – for a Britcar MSA British Endurance Championship (BEC) so finely balanced – the Britcar 24, the only twice around the clock race for GT cars in the UK, attracts a blend of one off entries and regular teams that lend the race its own distinct feeling aside from the rest of the championship. This weekend’s race – the eighth edition of the headline event – is no different, with the battle for victory likely to come down to a fight between the Britcar regulars and one-off entrants attracted by the challenge of a day long race around the Silverstone Grand Prix circuit.

With financial concerns to the forefront the entry list – admittedly – is not as strong in number is in some previous years, but in strength it loses nothing, with four strong entries in the premier of the four classes.

On paper – feel free to insert the footballing cliché to undermine that statement – the race should be battle between a pair of teams who have already tasted success in the BEC this year.

Lawrence Tomlinson leads Team LNT, twice winners this year at Donington and Snetterton into the 24 a fortnight after the team scored an impressive fourth place finish in the three hour Avon Tyres British GT Championship race at Silverstone. The four drivers who will share the GT3 Ginetta G55 make up almost certainly the strongest driving squad on the grid with Tomlinson and Mike Simpson – drivers for both wins this season – joined by Richard Dean and Tom Kimber–Smith. With the trio around Simpson back together for the first time since winning their class at Le Mans in 2006.

Team LNT have a starry driver line-up and come to the 24 on a high (Photo Credit: Chris Gurton Photography)

Their main opposition could come  from the joint Neil Garner Motorsport/Strata 21 garage. Brought together over the winter the combination of Paul White, Javier Morcillo and Manuel Cintrano eased to the Class One title and lie only five points adrift in the overall championship with a single points scoring race to go – that at Donington Park at the start of November.

With four wins already this year – including at the season opener at Silverstone in March – the team have had a strong 2012 to date and, in the absence of the SB Race Engineering Ferrari, their rivals for overall wins through most of the year sitting out the 24 will be looking to add another win to their successes, with Adam Sharpe promoted from Strata 21’s Porsche team for the weekend to join the Mosler side of the garage.

Another team to skip the 24 in favour or focusing on the BEC title are points leaders Bullrun, though another Lotus Evora is a potential threat in the hands of a Cor Euser Racing squad that finished third overall last year.

Bullrun’s star driver – former Clio Cup champion and BTCC driver – Martin Byford, however, returns to Synchro Motorsport for what will be an emotional race for the Honda squad, coming just months after lead driver Dave Allen was killed testing a road car at Millbrook. In the indomitable little Honda Jazz Byford and the rest of the team will compete in a Class Four with more than a few teams capable of mounting a surprise run this weekend.

Much has been written about the Team Toyota GB entry into this year’s race with a brand new Toyota GT86 and a driving squad led by double BTCC champion Chris Hodgetts and his son Stefan, the KX Akademy driver arguably one of the most talented yet underfunded tin-top racers in the country.

The GT86 contingent is doubled by the Martin Short led Rollcentre Racing team, part of the winners of the first Britcar 24 in 2005, then fielding a Mosler. Both teams are understandably cautious, entering new cars into such a long race, but are just part of what could be the most competitive class on the grid.

APO Sport, outgoing Britcar Production Cup champions James May and Alex Osborne, now racing in the GT4 ranks of British GT, return to the Britcar paddock a year after their last visit, now with a Renault Clio (rather than the SEAT Leon they took to the title). Still with a SEAT are 24 Hour specialists Red Camel, the Dutch team (class winners at the Nurburgring 24) coming to Silverstone a fortnight after racing in the Barcelona 24 Hours.

More 24 hour pedigree (and another Nurburgring class winner) is the brought by Carvell Motorsport Jaguar, the big XF-S seemingly out of place against the smaller cars in the class. 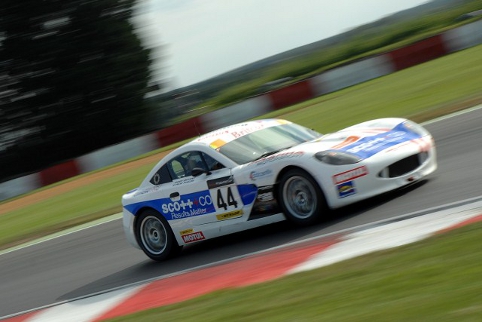 The lowest class in the race is not just made up of one-off Britcar entrants, with Piranha Motorsport – class winners in the Britcar Production Cup this year – fielding a Ginetta G40, the quartet of Rory Bryant, Simon Mason, Ryan Ratcliffe and Chris Bialan more than capable of claiming a class for the regulars.

The Production Cup – the sister series to the BEC, aimed at lower spec cars – provides several of its regulars to the 24 Hours with the BMW M3s of Intersport, MMC Motorsport and Guy Povey all part of Class Three.

However, almost certainly the most noteworthy team in the class is the Mission Motorsport. Formed earlier this year the team are part of the Armed Forces’ Motorsport Charity, with members, drawn from the ranks of former servicemen. For James Gillborn, the learning curve in the build-up to the race has been especially steep as the 23-year-old, who lost a leg serving in Afghanistan, only taking part in his first ever race at the most recent Britcar round at Snetterton.

Gillborn is just one of four Armed Forces personnel on the team. Team leader James Cameron returns after racing as part of the Mazda squad in 2011, while Martyn Copleston and Gary Dunning have only started racing with the start of the Mission Motorsport program. The team is rounded by experienced Nissan driver Chris Ward.

While the smaller grid – just 35 cars at the time of writing – may be a disappointment to some it presents an intriguing race with possibilities that the overall winner may come from outside of the top class.

With the MacG Racing team the third BEC regulars in the top class neither they, Strata 21 of Team LNT have had problem free seasons. That said, MacG’s Ultima GTR showed much improved reliability in its rebuilt form at Snetterton last month. The fourth car in the class – MB Motorsport’s GT3 Aston Martin Vantage, however, is an unknown in the hands of Mike Brown’s experienced privateer Aston squad.

But the chance is that the overall winners could come from Class Two or below. Chief amongst those in with a chance of stealing the overall win must be the Cor Euser Lotus Evora with three of the drivers – Americans Hal Prewitt, Jim Briody and Euser himself – back from the team than finished third overall as a Class Three team 12 months ago.

However, to even repeat the feat of winning their class they will have to get past three teams comprised of BEC stalwarts.

No team have been more loyal to Britcar than Topcats Racing. Warren Gilbert’s team came close to winning last year before Freddie Hetherington fell foul of a stuck throttle on the approach to Brooklands.

The team’s entry is scaled back to just a single Marcos Mantis this year, led by regular driver Neil Huggins. Their Marcos will be joined by the Team Tiger example, from a team that have shown great pace – if questionable reliability – through the season.

Perhaps, the most intriguing team in Class Two, is MP Motorsport’s BMW M3. For the four drivers the team combines Mark Poole and Richard Abra – production winners at Silverstone in March before switching the focus to the BEC – Clint Bardwell and Michael Symons, himself a winner in the production cup, completing the two race at Brands Hatch in June singlehandedly in his own M3. Driving an E46 M3 – something a workhorse in the Britcar series – they could be dark horses for victory if those in the top class find problems over the course of the race.

Qualifying for the 2012 Britcar 24 Hours is scheduled for 1pm on Friday September 21, with a night session starting at 7pm. The race is scheduled to start at 3:30pm on Saturday.

The Checkered Flag will have full coverage of the weekend, including live updates throughout the entire race.