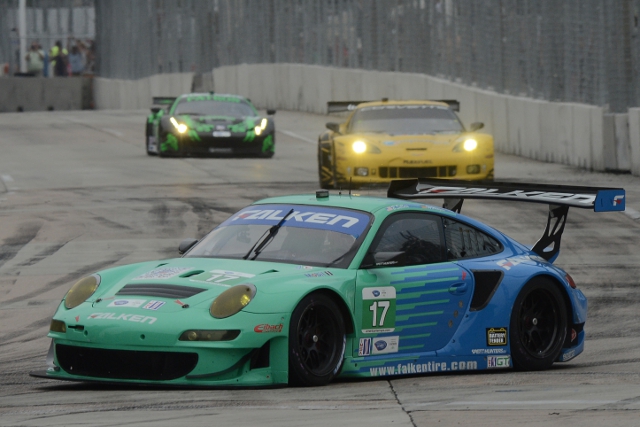 Henzler started the team’s turquoise and blue liveried Porsche from seventh in class by threaded his way through the inevitable first corner traffic jam, jumping up to run fourth in class behind the safety car as cars were recovered. Soon after the restart Henzler moved up to third, the second behind Jorg Muller’s BMW, following his fellow German past Tommy Milner when the Corvette driver was caught out by slower traffic through turn one. When Muller was given a penalty for avoidable contact Henzler assumed the lead before becoming one of the first GT drivers to pit for the driver change on 37 minutes into the race.

“The decision we made in our strategy meeting before the race was to pit before everyone else did,” said program manager Derrick Walker. “When your competitions dip in, take it early, and then they get a clean race track and run fast. We decided we would take the race to them.”

The pre-determined strategy worked exactly as planned and after re-joining the race in eighth Sellers progressed back to the lead as his class rivals peeled into the pits for their own stops.

With two safety car periods interrupting the second half of the race Sellers kept the lead from Oliver Gavin in the Corvette started by Milner from the pole, but despite the late pressure – and problems being held up by the normally faster LMPC cars around the twisting circuit – he held on to take a welcome win.

“Luckily for us, we have Wolf who does the impossible and drove from seventh up to the lead,” said Sellers. “When you’re given that opportunity, you can’t falter. My only mindset was to go as hard as I could and as long as I could, and not let that be the thing that stopped us from getting a win.”

The team’s next race date is September 15 for the next round of the American Le Mans Series, but before that they will run at Road Atlanta, continuing their on-going tyre development.