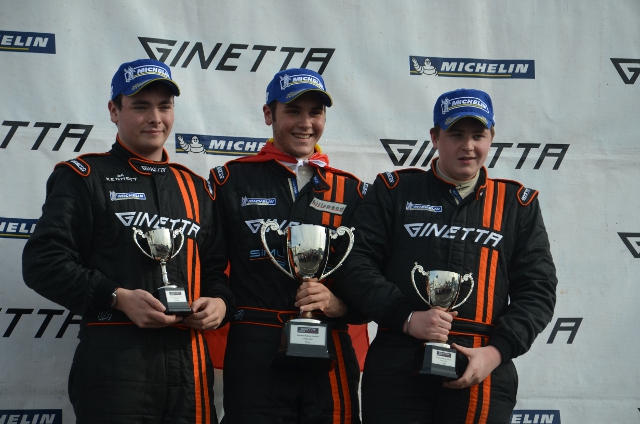 Pepe Massot took the win in an action-packed Ginetta Junior Championship encounter at Silverstone, the Spaniard emerging from a tight five-way battle to secure victory in Round 18.

Massot took the win ahead of Douglas Motorsport team-mates Andrew Watson and Niall Murray, with the latter seeing his championship chances given a boost after a retirement for championship leader Charlie Robertson.

Robertson started the race from pole position, but a slow getaway for the pole-man allowed fellow front-row starter Will Palmer to squeeze into the lead through Copse. The lead was short-lived though, with Robertson re-gaining the advantage around the outside at Brooklands, with Massot following him through into second.

Robertson held the lead until lap three, when a mistake at Maggotts saw him run wide, with Palmer taking advantage to re-take the lead from Massot, Watson and Murray, with Robertson slipping to fifth, before losing further ground to title rival Sennan Fielding a lap later.

Palmer held the lead for exactly a lap, as the next time round at Maggotts the HHC Motorsport driver was shuffled down to fourth, with Massot assuming the lead from Watson. The Irishman challenged for the lead at Brooklands, but only succeeded in losing a place to his team-mate Murray in the process.

As the top six challenged for the lead, Robertson was left scrapping in the next group of drivers and it ended in disaster for the 15 year old. Heading into Maggotts on lap five, Robertson got squeezed in the middle of three cars, with contact from behind sending him and Freddie Lee spinning off into the gravel and out of the race.

At the front, Massot was coming under pressure from Murray, however a challenge at Copse resulted in Murray running wide, dropping him back to third behind his Douglas Motorsport colleague Watson.

As the front three battled, Palmer and Fielding joined the fun heading onto the final lap. Watson took the lead into Maggotts, leading to the top five running side-by side down the Wellington Straight for the final time.

A decisive move for Massot saw him emerge from Brooklands in front, the Hillspeed driver crossing the line to take the win, while Watson took second, his second podium of the weekend and fifth of the season.

Behind, Palmer, Murray and Fielding headed out of Luffield three abreast, with the trio running across the line side-by-side before contact between Palmer and Murray sent them both spinning off after the flag.

Palmer crossed the line third, just, but was handed a five second penalty for exceeding the track limits. This promoted Murray and Fielding into third and fourth respectively, with Palmer dropping to seventh behind Oliver Basey-Fisher and Keith Donegan.

Oliver Chadwick, Tom Jackson and Eliot Paterson completed the finishers, while Harry Woodhead joining Robertson and Lee on the retirements list after first lap contact sent him into the Luffield gravel.