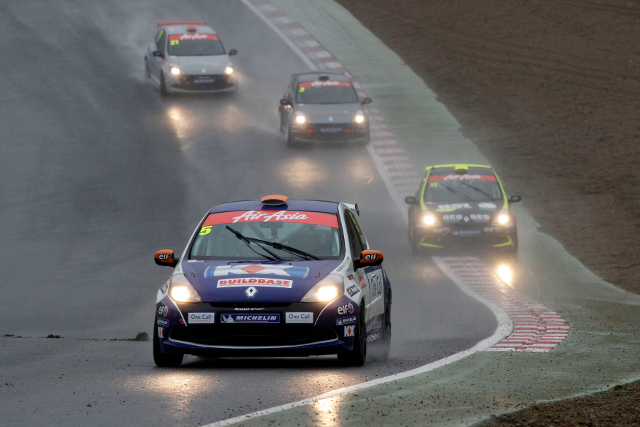 The former Clio Cup Vice-Champion snatched the lead in the opening race at the first corner and went on to enjoy a fantastic tussle with Josh Files for the win, the lead changing hands twice before Hodgetts taking the win on the final lap.

In race two, the KX Akademy and One Call-Insurance backed racer produced another sensational start to lead away once again and built a 2.5 second lead  before the safety car came out. At the restart, Hodgetts came under huge pressure from Mike Bushell, but held on to complete the double.

“I did the double; Firstly in tricky, twilight conditions last night and then today on a soaking wet track! They were two very difficult races and Bushell came on strong towards the end of the last race. But that doesn’t matter now, does it. It’s the results that count and, while he may have been quick, I was just a bit wiser and positioned the car correctly to win the race,” said Hodgetts.

“As a whole, the season has been great. We’ve achieved four wins in the four race meetings I’ve contested, which is more than the guy who won the championship. I think we’ve done a brilliant job. We’ll be working hard to ensure we’re out for the whole of next year – we’ll certainly make a few heads roll if we do that!”

Having conceded the Masters Cup last time out at Silverstone, Finlay Crocker was keen to end the season with strong results and did just that in the opener, finishing eleventh, although contact and a gear-selection problem left him eighteenth in race two.

Vic Covey finished a disappointing fifteenth in the opener before bouncing back to finish eleventh in race two, while Ronnie Klos secured nineteenth and thirteenth place finishes.