Wayne Gibson held on to the lead in the face of a late chase by Michael Symons to secure victory for he and Kevin Clarke for Intersport in the final Britcar Production Cup race of the season.

Clarke started the race in the #33 BMW M3 – one of three Bimmers entered by the Intersport team in the 90 minute race – and took the lead from Symons, driving the race alone, at Paddock Hill Bend on the opening lap. However, while Clarke held the lead throughout the first half of the race before pitting to hand over to Gibson under the third and final safety car of the race the scale of the gap Symons faced in the second half of the race was more down to luck than judgement.

In just the opening ten minutes of the race Clarke and Symons pulled out a 20 second  lead over third placed Craig Davies, starting the Sub–Zero Wolf SEAT. The gap was to prove decisive.

When the safety car made its first appearance, after Dave Cox beached the MMC Motorsport BMW in the Paddock Hill gravel, it did so between the leaders and Davies, and when Symons took advantage of the slow running to make his compulsory stop it allowed Clarke alone to enjoy a lead of nearly a full minute over Davies and Guy Povey who had inherited second a third from early pitstoppers Symons and Adam Hayes, Hayes in another of the Intersport entries.

The third Intersport BMW – started by Angus Dawe – was the cause of the second of the three safety car period. Shortly after the first restart Dawe tangled with Andy Thompson’s SEAT, the contact dislodging the rear bumper of the BMW, leaving it as an obstruction on track. Again, when the safety car emerged it found a slot on the short Brands Hatch Indy Circuit that preserved Clarkes’s healthy advantage, Povey now in second place as Davies pitted, Adam Jones taking over the car.

Clarke finally gave up his lead under the final safety car, brought out when Ryan Ratcliffe slithered off in the Piranha Motorsport Ginetta G40. Clarke’s stop, as well as those of Class Two leaders Nigel Ainge and Clive Bailye and Class Three leader – and champions elect – Harry Cockill left Povey as the last man not to have pitted and thus comfortably in the lead, with only Gibson for company on the lead lap, Symons a lap down on the leader occupying third place.

Inevitably Povey had to surrender the leader, incurring a drive through penalty for a ‘safety car infringement’ before pitting for Graham Coombes to take the car to the checkered flag.

With Povey removed from the fight for the lead and – thankfully – the race running safety car free for its second half the season was left to conclude with a chase to the flag.

Even while in third Symons had been inching closer to Gibson, and when the Intersport driver took the lead Symons was promoted onto the lead lap, 19 seconds behind but he continued to close the gap.

Consistently faster, Symons seemed to have broken the back of the chase as he took advantage of an easing of the constant rain that had hovered over Brands Hatch the entire day. He took the fastest lap of the race down to 57.773 seconds, cleaving two seconds from Gibson’s advantage at the time on course to take the lead as the time – and so laps – left in the race wound down.

Then a stutter – though one only perceivably in the lap times – as Symons came up to lap a clump of slower traffic that included Jason Cox, the MMC BMW recovered from its earlier stop in the gravel, Mike Wilds, on his way to winning Class Two alongside Ian Lawson, and Carl Breeze, the Ginetta GT Supercup champion on his way to a late retirement when his Ginetta G40 developed an oil leak.

As times climbed again, a combination of traffic and a potential return to the rain, Symons lost crucial time, Clarke escaping into a lead that would be too great for Symons to make up, though once through the traffic he cut the lead again to just 4.1 seconds at the checkered flag at the end of 76 laps of racing.

Davies and Jones completed the overall – and Class One – podium with Lawson and Wilds winning Class Two, the ING Sport teammates able to jump ahead of both Eurotech and Topcats Racing entries in class by pitting under the second safety car, thus taking the lead when Ainge and Bailye made their own stops later in the race. 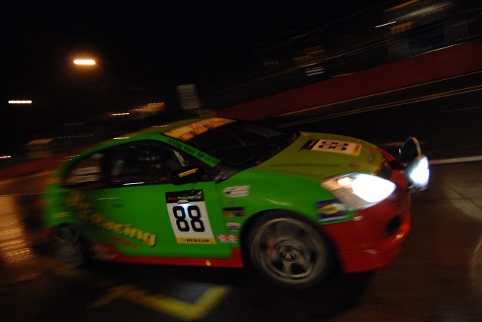 Tim Saunders and Matt Hamilton won Class Three thanks to a fighting second stint from the former BTCC driver. Predictably Saunders fell back from the start from the lofty fourth row starting spot, losing the class lead to the Cockhill’s HE Racing/Daniels Motorsport Honda Civic.

Unlike in the Class Two battle despite the Cockill’s later stop – Harry handing over to brother Edward – they maintained the lead, but once the race restarted Hamilton began to gain – taking seconds a lap out of the lead, overhauling Edward for the lead with a quarter of an hour remaining.

Hamilton’s pace moved him up the order, taking eighth place overall when Breeze retired in the closing minutes. Behind the penalised Povey/Coombes combination the Cockill’s finished in tenth overall, securing for themselves the overall title. Clive Bailye and Paul Black won the Class Two title for Topcats Racing while, despite missing the final round Mark and Peter Cunningham won the Class One championship.