On a night when the 2012 champions were crowned in the Britcar MSA British Endurance Championship (BEC) it was the previous two recipients of the title who battled for the win in the four hour ‘into the night’ race at Donington Park.

Just five points divided Class Three champions Bullrun and the Class One winners in the Neil Garner Motorsport run Mosler before the race, though the Bullrun squad – dominant in their class for most of the year effectively needed a disastrous non-finish in order for the title to pass from them to the Mosler team of Javier Morcillo, Manuel Cintrano and Paul White.

As the race unfolded neither of the title hopefuls had clean races. Morcillo began the race in the Mosler falling into second place behind Richard Abra in the brand new GT3 Aston Martin Vantage. Abra, who with co-driver Mark Poole has been a BEC regular, but in the lower classes with a BMW M3, pulled away in the Barwell Motorsport run car, pulling over a minute ahead of Morcillo in an uninterrupted first hour of racing until both pitted on lap 52.

Poole climbed into the Aston, Cintrano into the Mosler just as the safety car made its first venture onto the track after the MacG Racing Ultima had shed a front-left wheel while descending through the Craner Curves.

The brief safety car, Jonny MacGregor recovering the Ultima back to the pits under its own power, allowed Cintrano to halve the gap to the Aston though a spin following the safety car would mean the Spaniard dropped a lap down, while keeping second place overall ahead of the MJC Ltd Ferrari, such was the advantage of the rest of the field Abra and Morcillo had established in their opening stints.

Just as the Aston and Mosler had galloped away in their first hour in tandem their challenges to take the win would end in tandem in the Redgate gravel trap.

First Cintrano, then Abra, were caught out a short sharp shower, both beaching their cars in the gravel, prompting a third safety car of the race – the second having been for the Optimum Motorsport Ginetta G55 which had stopped at the entrance to the pitlane having lost wheel to a similar failure to that which afflicted the Team LNT example during the Britcar 24 Hours.

Richard Abra was the class of the field in the opening stint (Photo Credit: Chris Gurton Photography)

With the SB Race Engineering Ferrari dogged by serious electrical problems, the team going through three alternators during the race, and the Ultima, Ginetta, Aston and Mosler all having played a part in safety car periods in the first 90 minutes of the race the battle for the victory was left to 2010 champions MJC Ltd, their familiar red and white Ferrari 430 driven by Witt Gamski, Keith Robinson and John Gaw, and 2011 champions Aaron Scott and Craig Wilkins, returning to BEC action in the GT3 Racing Dodge Viper after a season in the Blancpain Endurance Series in Europe.

Gamski and Wilkins had enjoyed a close battle during their race opening stints, Gamski, fighting up to fifth and sixth through an eclectic group that also included John Loggie’s Team Parker Racing Porsche, Flick Haigh in the Fauldsport Ginetta G55 and Martin Byford starting the Bullrun Lotus Evora before Richard Adams and David Green would follow later in the race.

When attrition ripped through the Class One field it was the two Invitation entries who rose to the top, Robinson leading Scott as the gap remained steady at around 50 seconds until the pair made pitstops as the race hit the 100 lap mark around the Donington Park national circuit.

The two stops briefly gave Class Three invitees Loggie and Chris Jones the overall lead, with Bullrun in second overall, only for MJC to retake the lead now with a lap lead over the chasing Viper. The comfortable lead only lasted until another safety car period, the Strata 21 Porsche a third car to lose a wheel – this time a right-rear.

MJC made their final pitstop on lap 121 as the safety car was withdrawn after the recovery of the Porsche, Gaw embarking on a final stint trying to chase down Scott in the Viper. 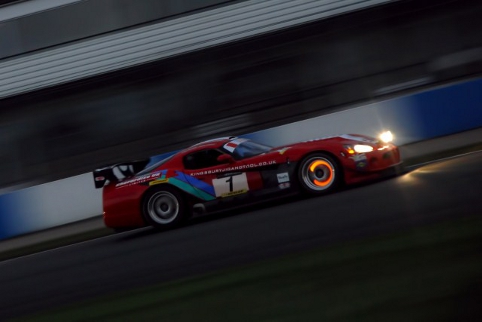 The gap remained relatively stable, only starting to come down towards the end of Scott’s stint, the big Dodge suffering from brake problems that even in the final half hour cast questions over whether they would finish the race at all, Wilkins joking after the checkered flag that he had been under “strict instructions not to use them”.

Despite an error from Gaw, spinning the gap back out to nearly a full lap after closing to just half a minute behind, the Scot took the lead when Wilkins took over the #1 car for the final 25 minutes of the race. With a minute in hand the MJC garage was a place of relative calm, with none of the concerns of the GT3 Racing squad.

Fuel was, perhaps, the only possible issue in running a 70 minute final stint. However, a single 25 litre churn of Sunoco on the pit apron was, Gamski assured, only there as a remnant of the previous stop.

“Everybody was really nervous,” Gamski told theCheckeredFlag.co.uk as Gaw crossed the line. “We haven’t raced for 13 months and the cars are getting better and better and we’ve haven’t done anything to our car. We’ve all put in such an effort with Keith and John it’s just been fantastic – what a comeback!”

After 177 laps, with fuel in hand Gaw eased to the victory – MJC’s first since last year’s season opener with Scott taking second and the Class Three winning Track Torque Chevron of Chris Hart and Tommy Field taking the final step on the overall podium, their third such result of the season following on from the May race at Snetterton and Oulton Park the following month.

Despite the trio of overall results the Chevron team missed out on the Class Three championship to Bullrun.

A race on track was on the cards for the Class Three race win between the two teams, the Chevron in third in the same period of the race the Lotus held third – just 20 seconds apart. However, the team of Byford, Green and Adams, would be delayed by a cracked throttle body on the Evora that has otherwise been near faultless all season.

The problem would drop them to 12th overall in the final standings, one place ahead of the team in the Mosler they beat to the title. With both of the top two not scoring points, the points for the Class One win allowed Morcillo, Cintrano and White to close the gap to Bullrun to just three points, but the damage to the points lead was limited enough for Byford, Adams and Green to begin celebrations.

After Poole’s off at Redgate he and Richard Abra sped back up the order to fourth overall, just four laps down on the winner despite losing in excess of 20 minutes as they forfeited the lead earlier in the race.

The top five was rounded out by Flick Haigh and Ryan Ratcliffe, winning Class Four for Fauldsport in the Ginetta G55 Cup. As an invitation entry the pair were ineligible for points, meaning Matt Smith, Peter Smith and Dan Eagling picked up maximum points in class from the second step of the podium and seventh overall.

As the lone entrant in the class Topcats Racing won Class Two, despite a diff oil leak forcing a lengthy pitstop in the first hour of the race. However, the class title went – in their absence – to Simon Phillips and Pete Storey of Motionsport.