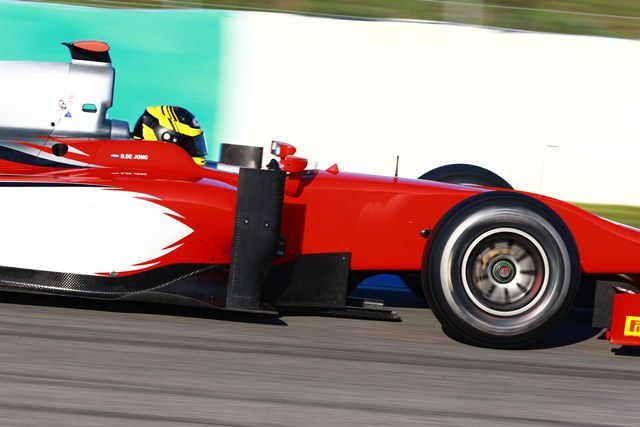 MP Motorsport has competed in Formula Renault 2.0 since 2003, and this year formed a partnership with British outfit Manor Competition. They have also competed in Auto GP for the past two seasons.

The team has a long relationship with De Jong, who has raced for the team every season since he started racing single-seaters in 2008. This year he came fifth in Auto GP with the team, and also started eight GP2 races with the Rapax squad.

In post-season testing he has been driving with Scuderia Coloni, whose departure from the series at the end of this year following a disagreement with organisers creates the vacancy for MP Motorsport to join the series. MP will run the GP2/11 car for the first time in the opening pre-season test next year.

“We are pleased to welcome MP Motorsport to GP2,” said GP2 CEO Bruno Michel. “I am convinced that they will adapt quickly to the Series and to the car. It’s always a big challenge for a new team to join our high levelled field, but the winter break will give them the time they need to get ready and be competitive straight from the first pre-season test session next year.”

MP Motorsport Team Principal Sander Dorsman added: “We’re really excited to be a part of the GP2 Series. It’s a major step for our team and a great moment for everyone at MP Motorsport. There will be a lot of work to do over the winter in order to be ready for our first outing, but we’re really looking forward to the challenge.

“We’re also very happy to have Daniel onboard for our first season in GP2. We know him well and he showed good speed and consistency during the post-season tests in Barcelona and Jerez. We aim to sign another experienced GP2 driver to maximise the performance of the team going forward.”