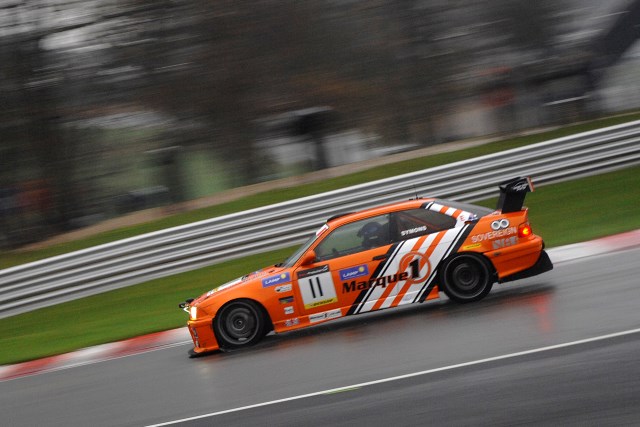 Michael Symons will start the final race of the Britcar Production Cup season from pole position, snatching the fastest time away from Intersport pairing Wayne Gibson and Kevin Clarke late in the session conducted in pouring rain

Gibson and Clarke, taking one of three Intersport BMW M3 in the field for the 90 minute race at held the provisional pole for much of the session, taking the target time down to 58.149 with a succession of early improvements in the session.

Symons, winner of the Production Cup’s June race on the same Brands Hatch Indy circuit as the finale but cannot win the class championship, the gap too great between he and the absent SG Racing pairing of Mark and Peter Cunningham.

The Intersport team’s early lap was good enough to keep second place on an all BMW front row.

In the absence of the Cunninghams Craig Davies and Adam Hayes piloted the best of the SEATs, the Sub Zero Wolf team starting from the inside of the second row, alongside the Ginetta G40 of Tom Howard and newly crowned Ginetta GT Supercup champion Carl Breeze, the duo heading Class Two by some considerable distance, their nearest rivals in class only qualifying tenth.

In total there were six BMWs in the top ten, including all three Intersport cars – Martin Thomas and Angus Dawe combining for fifth place, Adam Hayes and Mark Radcliffe ninth.

Hayes and Radcliffe, regulars in the Production Cup paddock all season will start one place behind series newcomer – but former touring car man Matt Hamilton, sharing a Honda Civic with Tim Saunders, Hamilton rejoining the TH Motorsport team that ran his Civic during his seasons in the BTCC qualifying the car eighth fastest.

Champions elect – they need only complete half the total race distance to assure them of the overall title – Edward and Harry Cockill will start 13th in the Class Three HE Racing Honda Civic, the closest rival to the new Saunders and Hamilton combination in the class.

The Cockill’s nearest challengers in the overall points, waiting to pounce should the worst happen to the brothers, Paul Black and Clive Bailye will start from 15th in the Class Two Topcats Racing SEAT