Lowndes Turns Up The Heat In Battle For Second 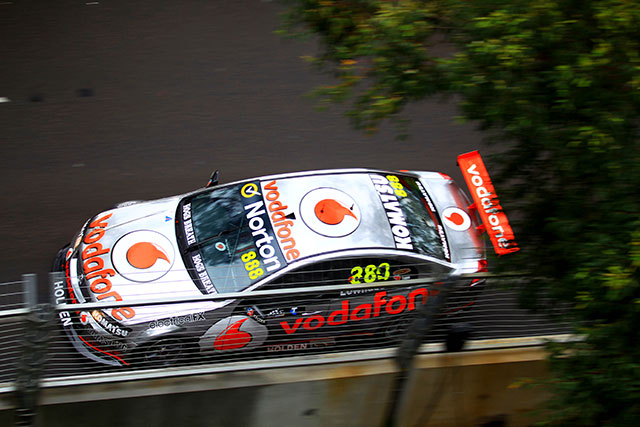 Craig Lowndes has moved into second in the V8 Supercar Championship standings after winning the first 250km race of the Sydney Telstra 500, with just one more race of the season to go.

The 38-year-old claimed the victory by just 1.1s from pole sitter Lucky 7 Racing’s Tim Slade with Holden Racing Team’s James Courtney picking up his first podium of the season in third.

Determined to deliver TeamVodafone its second successive 1-2 finish in the championship, the win was due in large part to a pit lane sacrifice by team-mate Jamie Whincup. The champion-elect deliberately pulled over in pit lane in the final stops to allow Lowndes through and avoid doublestacking. After starting 16th on the grid, the switch catapulted Lowndes from tenth place to third. Turning the screw on Slade, Lowndes then swooped into top spot after Slade made a small error and ran wide 13 laps from home.

The victory moved Lowndes three points clear of rival Orrcon Steel FPR’s Mark Winterbottom and makes him the only repeat winner in the fourth year of the event at the Sydney Olympic Park circuit. Career win number 89 also moves Lowndes to within one victory of Mark Skaife’s all-time win record.

Sweltering temperatures, fuel-economy battles and the tight 3.42km street circuit combined to take a big toll on the field. Winterbottom was one of several drivers to make a third stop during the final stint knowing he could not make it to the end on fuel, while seven drivers failed to finish.

Shane van Gisbergen made an early exit from the race after a clash with Team Hiflex driver Tony D’Alberto on the opening lap damaged the steering on the SP Tools Racing Ford and brought out the first Safety Car. Limping back to the pits, the New Zealander then turned into the Medical Car, ending his day completely. Stone Brothers Racing teammate Lee Holdsworth (IRWIN Racing) never even made it to the grid following a driveline failure at the start of the warm-up lap.

Two more full-course yellows appeared over the opening 20 laps with a mechanical failure for Jim Beam Racing’s Steven Johnson on lap six and then on lap 19 after a clash between David Wall and D’Alberto spun Wall’s Wilson Security Racing car around.

The Safety Car was again required on lap 44, this time for Jason Bright’s stranded Team BOC Holden. After wrangling with Fujitsu Racing GRM’s Alexandre Premat, Bright ran into the tyre barrier at Turn Eight. He restarted but the impact dislodged the car’s safety cut-off switch and it rolled to a stop at Turn One of the following lap.

Running inside the top five for much of the race, Premat was set for his best result of the season, but with cockpit temperatures reaching temperatures of around 60 degrees, he fell victim to the heat. With 15 laps remaining he was forced to retire with severe dehydration, needing immediate medical assistance as he was carried out of his Commodore.

The V8 Supercars will be back on track on Sunday for the second leg of the Sydney Telstra 500 and the final race of the season.