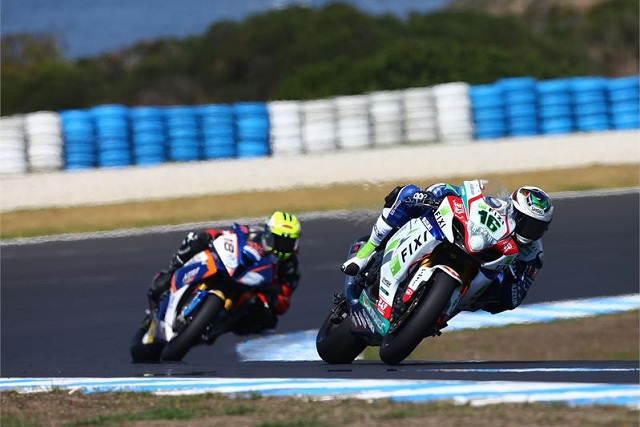 Jules Cluzel made an impressive start to life in World Superbikes with a storming ride to seventh place in race two at Phillip Island. The FIXI Crescent Suzuki rider put a difficult first race and pre-race injury problems behind him to beat teammate Leon Camier as well as both PATA Hondas. Cluzel was happy just to have completed two full race distances but the results were a welcome bonus on his SBK debut.

“I am really happy with both races, even though the first one was very difficult, but I finished and learned a lot. We chose the wrong tyre in the first race, which was not a big problem because I need to learn and understand everything. I needed to do some laps today and I think in the two races today I did more laps than I had done all weekend – and maybe the test as well! It’s really good to finish the weekend like this and I am pleased for my team as well because they have had a tough time and worked really hard to get me on the track. I think today has been a good step for the future.”

For Camier, a week that showed such promise only yielded a pair of ninth place finishes. Camier blamed his lack of pace in the opening race on the same tyre choice error that his teammate had made.

“The first race was really difficult and the bike just didn’t feel like anything we’d been working on over the weekend. We really struggled and we made the wrong tyre choice – by the end of the race the tyre was destroyed! This was very strange because all weekend we’d done race runs on the tyres and it hadn’t shown wear like that. I’d put in good laps on used tyres in the test and during practice, so we were confident that it would work, but whatever the reason is, it didn’t!”

The second race went downhill immediately when he was caught up in a collision between Chaz Davies and Loris Baz but Camier fought back to finish two places and two seconds behind his teammate.

“I got a better start in race two and tried to make some places up early on, but as I tried to go round the outside coming into a corner there was a big crash in front of me and I got taken out and on to the grass – so that was really the end of the race for me! The rest of the time was just spent catching up and racing with some other guys. I had to try and do what I could and I could see Jules and Johnny Rea coming back to me really quickly so I kept pushing, but just couldn’t get up to them. It’s frustrating because I felt that in the second race we had the package to challenge the front pack.”