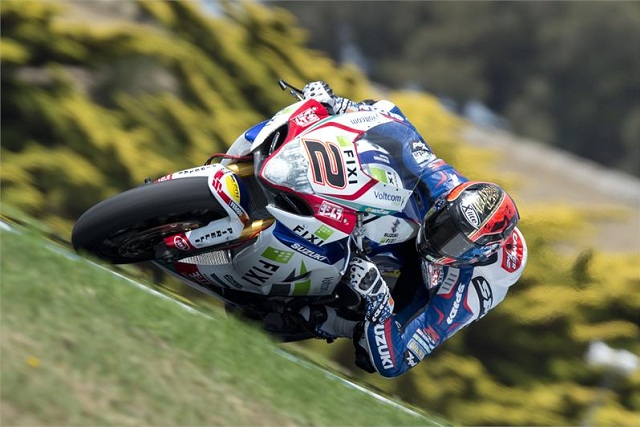 Fixi Crescent Suzuki riders Leon Camier and Jules Cluzel showed impressive pace on the opening day of testing at Phillip Island despite a crash for each. The teams are making the most of two days testing ahead of next weekend’s season opener at the newly-resurfaced Melbourne track with Aprilia’s Eugene Laverty topping the unofficial times.

Camier was a superb second but his morning was blighted by a highside at turn eleven. The Briton shrugged off the accident though and went on to set his fastest lap at the end of a long run as his cautious approach paid off in the afternoon.

“Today ended up pretty good considering the crash in the morning, and we ended up second quickest which was good. There is still room for improvement in the bike – nothing massive – and I also feel that I can improve as well and the feeling with the setting could be better. I think it will get harder and harder from here because the track will get better and everyone will push more. I don’t really know why I crashed because the track felt good and it was nice and smooth with the new surface – in fact it was quite confidence inspiring. I was on an in-lap and as I turned into the second-last corner in quite a positive way – but slower than previously – the bike just came round on me and off I went. I was really shocked, as I didn’t expect it and I was suddenly very high in the air – I thought it was going to hurt when I was up there – luckily I didn’t hurt myself other than bashing my elbow and ankle.”

“For the rest of the day I had more respect for the track and I just let it come to me. The surface improved as the day went on, not with grip really but tyre durability. We ended up going pretty quick, which was good and now we have to work on race-pace and concentrate on the race weekend.”

Cluzel, who will make his World Superbike debut this season, finished the day in seventh place and came unstuck at the same place at his teammate, not once but twice. The Frenchman suffered a large cut on his elbow, making it unlikely that he’ll take part tomorrow.

“I had a really good feeling on my first time here on a Superbike, but I had a big crash in turn 11 – it was so big I think it should now be ‘Cluzel Corner’! I lost the rear really quickly and it took me by surprise, because I don’t really know what happened. The guys repaired the bike quickly because it was very damaged and they made sure I could ride at the end. I then had a second crash in the same place and I cannot say anything about it. It was also very surprising and although it was a less aggressive crash it opened the cut on my elbow. The feeling on the bike was really nice though and the GSX-R is easy to ride. After the first crash I had some good lap-times and I paid more attention to the track and so I was really confused why I crashed in the same place. I need to understand why this happened, maybe it is a certain style that I need to learn to ride the Superbike and especially in this corner – I don’t know yet!”