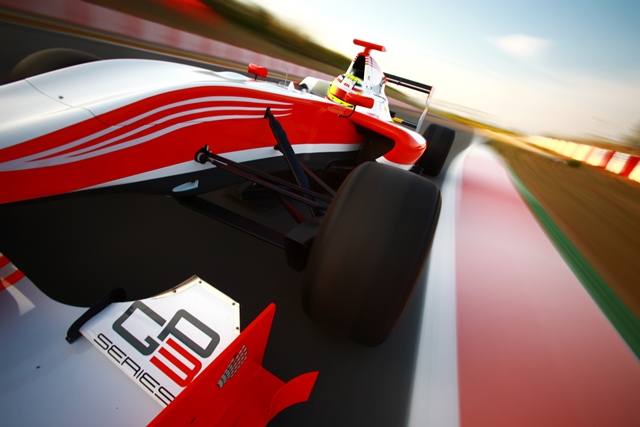 Pre-season testing for the 2013 GP3 Series season starts at Estoril tomorrow, with the first chance for teams and drivers to try the new upgraded car.

The three-day test in Portugal will see a full debut for the GP3/13 car which with revised aerodynamics and a 400bhp engine has been around three seconds faster than its predecessor in development tests. The test will see a full quota of nine teams fielding three cars each.

ART Grand Prix, who won all three teams’ championships with the first generation car, will run a new livery having moved on from their title sponsorship with Lotus. Confirmed drivers Jack Harvey and Facu Regalia will drive for them, while Conor Daly will be behind the wheel of the #1 car and looks set to spend a second season with the team.

Marussia Manor Racing earlier confirmed Dino Zamparelli as its first race driver for the 2013 season, and will also run its 2012 race winner Tio Ellinas and former Trident driver Vicky Piria at the test.

“It should be really fun to get in the car and do the three days at Estoril,” said German F3 champion Eriksson. “OK, I have never driven a GP3 car before but I have driven here in F3. I’m really aiming for a strong season. I know it will be really tough with it being my first year in GP3, and the field is looking strong, but I am very much looking forward to it.”

Webster will test with Status ahead of a planned move into GP3 – Photo Credit: Alastair Staley/GP3 Series Media Service

Webster, who tested with Carlin at the end of 2012 as he eyes a step up to GP3, said: “The car is new, the engine is new and I’m pretty excited. There’s an enormous buzz everywhere. For the first day and a half we’ll be making sure everything is OK and then the plan is to start pushing towards the end of the second day and see where we’re at.”

Fong, who also took part in post-season testing with Marussia Manor, added: “I’ve known all about Status GP for a while, especially when my mechanic from German F3 joined the team. I was interested in driving with them anyway and then they contacted me, so everything clicked. I’ve done GT racing but I hope to continue in formula cars – there’s nothing like the sensation of driving them.”

Fong will only spend a day-and-a-half in the car, with Eurocup Formula Renault ace Melville McKee taking over for the remainder of the running.

“The car is looking great already and I’m really excited to be in it,” said the Singapore-born Briton, who had mileage with MW Arden last year. “Hopefully I can get to grips with it early on. I’m really looking forward to working with Status GP, and GP3 is where I want to be this season.”

Having taken over the entry of Atech Grand Prix, Bamboo Engineering will run Lewis Williamson, Roberto La Rocca and Ethan Ringel. Williamson and La Rocca tested for the team under its old guise at the end of last year, while Ringel contested the 2012 season with Atech.

“This is a very important test for us all, we’ve done lots of work in the past week off the track and we’re looking forward to working through the programme, despite the impending weather,” said team boss Richard Coleman. “The guys can’t wait to get out and test in anger; likewise the mechanics are keen to see how the new car performs. We’re getting close to finalising our driver line–up for the season and have some great young drivers waiting in the wings.”