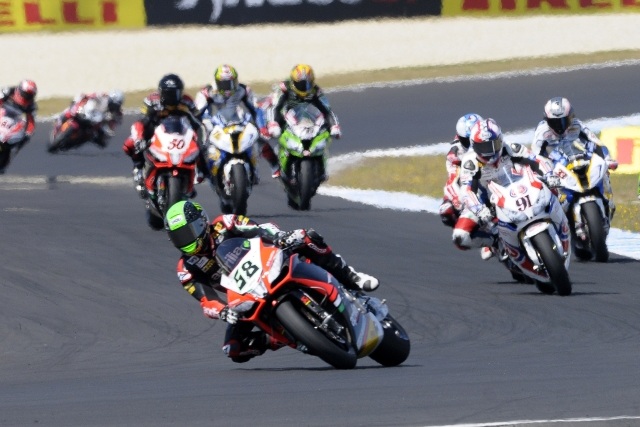 Eugene Laverty moved level on points with teammate Sylvain Guintoli at the head of the World Superbike Championship standings with a supremely judged victory in race two at Phillip Island. The Irishman turned the tables on Guintoli after his win in race one, snatching the lead two laps from the finish.

With Carlos Checa sidelined after his accident earlier, Laverty had the benefit of pole position but it was Tom Sykes that grabbed the holeshot from second on the grid. Guintoli got off to a much better start than he had in race one and tucked in behind his teammate in third with Marco Melandri up to fourth. The Italian would effectively be the sole GoldBet BMW by the end of lap one following a collision between Chaz Davies and Loris Baz at MG hairpin.

Both factory Aprilias made short work of Sykes to take control of the race but Guintoli would be the man setting the pace this time as Laverty slotted into second. Melandri wasn’t letting the Aprilias escape this time though although he had another pressuring him from behind in the form of Michel Fabrizio.

The top four couldn’t be separated throughout and it appeared Melandri was the man to beat as he dived past Laverty for second at MG six laps from home but Eugene upped the pace to a level no-one could live with in the closing stages. With three to go, Laverty scythed past the BMW at the Honda hairpin and despite the overtake, went on to smash the lap record on the same lap. Guintoli’s lead was looking rather precarious from that point and his teammate eased past into turn one seconds after his record breaking lap, giving him a lead he’d maintain over the remaining five miles.

Guintoli held onto second to secure Aprilia’s second factory 1-2 of the day while Melandri opened his account for the season with third. Fabrizio had to settle for fourth in the end despite another strong rider while Tom Sykes completed a solid start to his title bid with another fifth place. Davide Giugliano put his first points on the board with a fine sixth but the star of the race was surely Jules Cluzel who confounded his injury problems and lack of experience to finish seventh.

Jonathan Rea toiled hard but eighth would be his only reward with Leon Camier and Leon Haslam rounding out the top ten having been caught up in incidents of their own on the first lap.