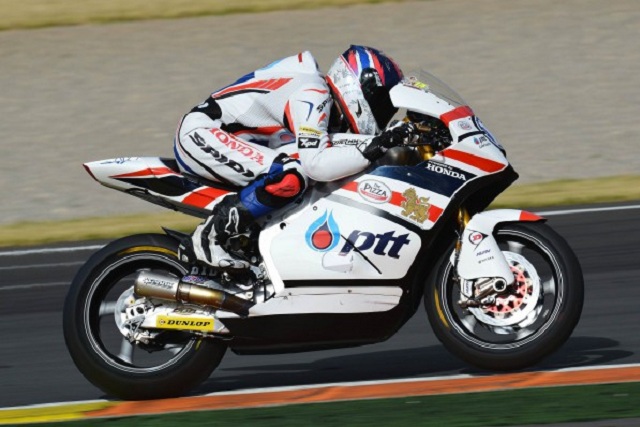 Ratthapark Wilairot was disappointed to end a promising test with a crash on the final day of running at Valencia. The Thai rider was involved in an accident with Thomas Luthi with the Interwetten rider suffering a broken right arm and shoulder, almost certainly ruling him out of the start of the season, but Wilairot escaped with little more than a bang on the head.

The 24 year old ended the week in nineteenth place and believes there is much more to come from the Suter chassis before Qatar.

“The crash today wasn’t what we wanted because up until that point we had enjoyed a positive test. Our lap times are in the second group and I found a good feeling with the bike. I had a recent operation on my arm and that was a bit of a problem but hopefully we can have a better test at Jerez next week.”

Gresini teammate Doni Tata Pradita will be embarking on his first full season in the Moto2 class and although he was the slowest rider on Thursday, the Indonesian is confident that he’s getting the hang of the 600cc machinery.

“I have spent a lot of time over the last three days trying to get a good feeling for the bike and working on some consistent laps. I think I am adapting positively to Moto2 and I hope we can continue in the same way at Jerez next week. We have been working on the set-up of the bike and the mechanics have given me a lot of help. I can’t wait to get back on the bike next week and make some more improvements.”