Work Still To Be Done For PATA Honda 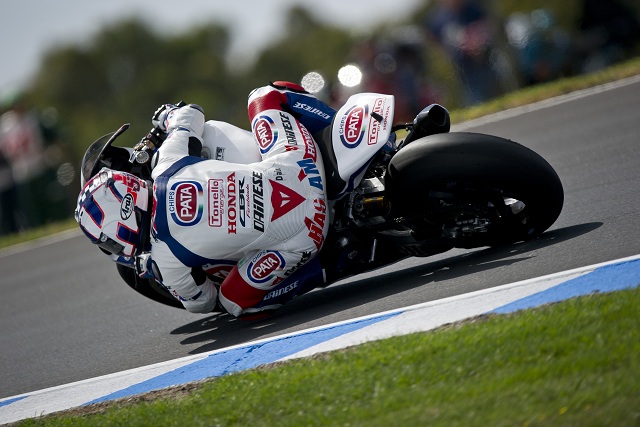 PATA Honda riders Leon Haslam and Jonathan Rea are both eying further improvements despite a solid start to the new World Superbike season in Australia. Haslam set the sixth best time in first qualifying although he later revealed he was focusing on race preparation as he did so and expects to go much quicker tomorrow.

“It felt really good today and we were just concentrating hard on our race set-up. We got a tyre that we did race distance on and the lap times were as good as anybody’s so I’m happy with that. A couple of tyres are definitely not the option – they’re just blistering and I think a couple of people are suffering with that. I think I was only one of a few riders that didn’t use the soft tyre this afternoon so I was quite happy with the lap time, which felt quite easy and comfortable, and I’m happy with the progression we’re making. We’ll spend tomorrow working on tyre life and fine-tuning the electronics, which seem to change day-by-day with the weather and the wind. It’s getting stronger each day so I hope it doesn’t change direction tomorrow – otherwise we’ll have to start all over again!”

Rea was only tenth fastest and admitted he was struggling to get the best out of the CBR1000RR early on. The Ulsterman improved as the day unfolded but still has concerns over the bike’s outright pace over a single lap.

“I was excited and nervous this morning, starting a new season, but it was quite tough witnessing the Supersport session this morning, which was full of mayhem and five red flags. I was a little unsure about the track conditions to start but we worked slowly and surely through some electronics changes but, unfortunately, my comments were a little strange because we were struggling to make progress with my feeling on the bike. In the second session this afternoon we did a long run and I picked up a much better rhythm at the end and I felt a lot better on the bike. We still need to do more work with old tyres but we’re not so far away on used tyre pace. I feel we still need to do some work to get an out-and-out lap time. We’ve had a long de-brief and I think it’s clear that we can still improve the engine braking and the initial touch of the throttle.”