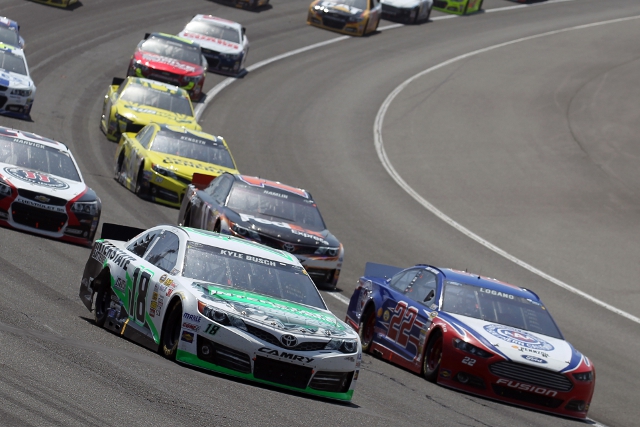 A last lap crash between Joey Logano and Denny Hamlin hung a dark cloud over the Auto Club Speedway as Kyle Busch drove to his second victory of the weekend in the Auto Club 400.

The two rivals, continuing their infamous fued from Bristol a week prior, came together in the middle of turns 3 and 4 sending the #11 car hard into the infield barrier, an impact that would send Hamlin to hospital for the night.

“He probably shouldn’t have done what he did last week, so that’s what he gets.” said Logano in post-race interviews. “And besides that, I think our Auto Club Ford was very strong all day. I was very happy with the car we had. We were super fast, led a lot of laps. Nothing to hang our head down about. That’s for sure. We were very proud of that.”

The incident gifted the victory to Kyle Busch, who had been running at the front of the field for the entire race, leading 125 of the 200 laps.

“I did a lot of things today similar to what I did yesterday,” said Busch, who won the Nationwide Series race the evening before, “People can say, oh, well, it’s just as easy to watch the race on TV and watch what the winner does, but I don’t really want to sit there for three hours and watch it, I’d rather be out there feeling everything and participating in it, and of course it’s always cool when you can win both races.”

“Well, those guys went to racing each other really hard, which is what this sport is all about and what’s great about NASCAR.” Busch said of the incident between Hamlin and Logano. “But unfortunately it got a little dirty there at the end, those guys were running each other really, really hard, especially down the straightaways, just side drafting one another and slowing each other down. That was the easiest time for me to gain time, just being able for me to run my own race right there and to run around the top. I just hope everybody is all right. Hope Denny is all right. I heard he had some issues there, but we don’t know all the facts right now. That’s all we can really say about that.”

Joe Gibbs Racing led the early stages of the race with Matt Kenseth leading Busch and Hamlin. Busch took the lead off Kenseth on lap 11. The attention, however, was purely on Logano and Hamlin as the two battled for third position.

The first caution of the day came on lap 28, caused by a spin from David Stremme off turn 2. As expected, everyone descended on pit road to make adjustments to their cars. The race off pit road saw no major changes to the running order as Kyle Busch led the field under caution following a very slick pit stop from his crew.

An exciting restart saw Kurt Busch dive below the white line and force his way up in to the top five, following a concertina on the inside line as Kevin Harvick got on the gas too early, having to check up before rear-ending the car ahead.

The racing was short lived, however, as the second caution came out on lap 38 due to an oil line in Timmy Hill‘s car giving way. A number of cars came down pit road during the caution to fix damage, with oil on track forcing them into the wall.

The restart came on lap 43, with Joey Logano making a move for the lead, eventually passing Busch on lap 44. A long period of green-flag racing followed, resulting in green-flag pit stops for the leaders, with Logano pitting first and the rest of the field following suit.

After the round of green-flag stops, Logano made contact with his crew chief, complaining of a problem with his car, dropping behind Kyle Busch in what was effectively the battle for the lead once everyone had made their stop.

The long period of green-flag racing came to an end on lap 91 as the third caution of the day came out for debris. Denny Hamlin won the race off pit road, leading Kyle Busch, Logano and Dale Earnhardt, Jr around under caution. Brad Keselowski was sent to the tail end of the longest line for entering the pit lane too fast.

Green flag racing resumed on lap 96 with Kyle Busch getting the jump on Hamlin and reclaiming his place at the top of the field. As the race passed over the halfway point Busch remained in the lead ahead of Joey Logano. Third place was held by Earnhardt, Jr, having crawled his way up the field and firmly placed himself within the top five.

The fourth caution of the day came with 84 laps remaining in the race as Joe Nemecheck suffered a left-rear flat tyre, making contact with the wall in turn 2. The field took advantage of the caution as everyone made their way down pit road once again. Dale Earnhardt, Jr’s pit stop dropped him down the field after a slow right-rear tyre change on the #88.

The restart came on lap 121 with Joey Logano taking the lead ahead of Kyle Busch and Kevin Harvick. There were only ten laps of green-flag racing before the next caution came out as the #9 of Marcos Ambrose cut a right-rear tyre, bringing the fifth yellow out. Once again the majority of the field came down pit road, with a two tyre stops bringing Tony Stewart to the lead ahead of Clint Bowyer, Brad Keselowski and Matt Kenseth, all of whom also changed two tyres.

Stewart and Bowyer led the field off the caution with 64 laps to go, while Kevin Harvick and Kyle Busch quickly got on to the tail of the two-tyre stop cars. Stewart lost the lead to Busch on lap 146 and after trying to fight back to regain the position, got tight into turn 2 and dropped back out of the top three.

Another round of green-flag pit stops begun on lap 162 as Earnhardt, Jr made his way down pit road. The first of the leaders to enter the was Keselowski, pitting from fifth position on lap 163.

The sixth caution of the day came on lap 169 after Ambrose’s left-rear tyre blew, ripping the rear of his car apart. Despite green-flag pit stops having only just taken place, approximately half of the drivers on the lead lap came in for fresh rubber, with a mix of strategies taking place down the field.

The restart took place on lap 27 as Busch stormed away from the field ahead of Kasey Kahne and Tony Stewart. Racing would only last for two laps, though, as Mark Martin was sent spinning on the back straight, bringing out the seventh caution of the race.

Racing returned on lap 180 with Busch still leading the field ahead of Logano and Stewart. Another short green-flag section saw the eighth caution come just six laps later, as Bowyer spun out at turn 3.

The final restart came on lap 189 as Busch led the field with just 11 laps to go. Stewart tried to get a run on the leaders, only to be blocked off by Logano.

“What the hell do you think I was mad about.” said Stewart after the race. “Dumb little son-of-a-***** runs us clear down to the infield. He wants to **** about everybody else and he’s the one who drives like a little ****. I’m going to bust his ass.”

“I had to throw the block there.” explained Logano. “That was a race for the lead. I felt if the 14 got underneath me, that was going to be the end of my opportunity to win the race, so I was just trying to protect the spot I had.”

As Logano closed in on Kyle Busch’s lead, Denny Hamlin worked his way in to third position. Logano took the lead from Busch on lap 194, winning a thrilling three-wide battle between Logano, Hamlin and Busch.

Hamlin looked as if he was poised to take the win on the final lap of the race, bumping doors with Logano down the back straight. The race was then handed to Kyle Busch on the final corner as Logano and Hamlin came together in between turns 3 and 4, with the #11 going hard into the infield wall.

Hamlin was quick to remove his window net before being taken to a local hospital in the back of an ambulance, where we would be kept overnight.