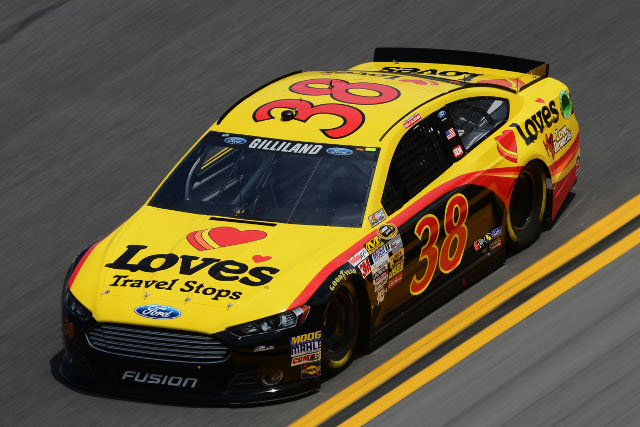 Front Row Motorsports will be hoping to cash in on hometown support as the NASCAR Sprint Cup heads to California for the Auto Club 400.

Two of the team’s Sprint Cup drivers, Josh Wise and David Gilliland, hail from Riverside, California, around 15 miles away from Fontana, location of the Auto Club Speedway.

“I always like going back to California.” said Gilliland. “When I moved to North Carolina, I moved from a place about five or 10 minutes from the racetrack there so I’ve still got a lot of friends and family there and a lot of people that helped me and gave me opportunities along the way to get me where I’m at today. It’s fun. I think all the West Coast races have a David Gilliland cheering section. It’s neat to come see everybody. We’ll probably have sections in the infield, in the grandstands, all over the place.”

“I love going out to Fontana, obviously, because I’m from Southern California.” added Wise. “So just seeing family and friends and being back where I grew up, it’s great to be back there.”

Unlike many of the venues on the Sprint Cup calendar, the surface of the Auto Club Speedway is old, worn out and abrasive. The track also has multiple grooves, promoting passing throughout the race, meaning drivers are more in control of their own destiny.

“It’s a racetrack that’s very hard on tyres.” said David Ragan, driver of the #34 Front Row Motorsports machine. “It’s abrasive. It’s going to be interesting to see how the tyres react to a little bit lighter racecar with the new Gen-6 car.”

“We worked really hard on our downforce tracks – the high-speed, mile-and-a-half, two-mile racetrack programme – over the last year or two.” Ragan continued. “The team’s done well at the superspeedways and road courses and had some solid runs at the short tracks. But we’ve really needed to work on the mile-and-a-half and two-mile programs.”

“Everyone’s going to have better answers about the Gen-6 cars as we go through more races, but I think they’re awesome cars.” added Wise. “Something that we do know right now is they look really cool. That, in itself, is neat. They’re easy on the eye and that helps connect with the fan and engage the fan more. From a driving perspective, we’ve taken downforce away from them, so a lot more is going to be based on mechanical grip. And with some of these repaves, as the tracks wear in, we can go back with softer tyres and we’ll actually have some tire fall-off and then the racing should get more and more exciting.”

By Justin Nguyen
2 Mins read
Spire Motorsports’ #77, piloted by Josh Bilicki, will feature “Slava Ukraini” and adorned in blue and yellow as part of a sponsorship from the Ukranian American Coordinating Council, who is providing armour and aid for the country’s civil defence units.
NASCAROff Road

By Justin Nguyen
3 Mins read
A short course off-road racing series on a quarter-mile paved oval track intended for stock cars? That’s what SODA did at Slinger Speedway. While SODA is only in its second year, Slinger’s interest in an off-road race dates way back.