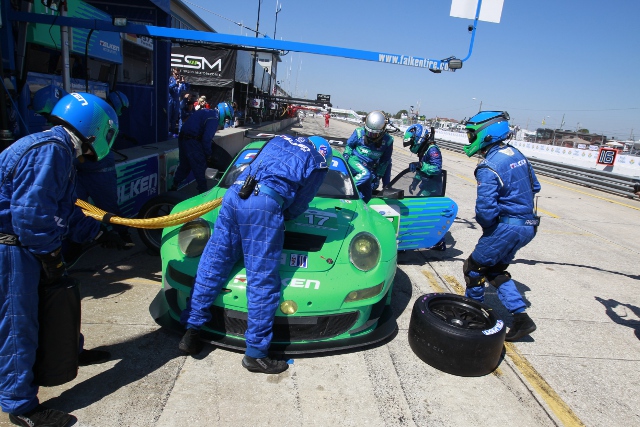 All three Team Falken Tire Porsche drivers variously described the day and the team as “great” as they claimed a class podium at the 12 Hours of Sebring to start off the 2013 American Le Mans Series (ALMS) season.

The team remained in the lead group of the super competitive class for much of the race after Wolf Henzler humped from twelfth in class at the start of the race to sixth at the end of the opening lap of the race.

“After qualifying and after this week of testing, I didn’t really expect us to finish on the podium,” Henzler admitted. “But once the race started, I felt like that maybe there was a chance to finish on the podium or get a good result. Always in the beginning of our stint we could follow with the faster cars. We made up a lot in the pit stops because our guys were so fast. They did such a good job all the time. Our car was just running without any problems. I think this was the key to finish on the podium today. Both Bryan an Nick did a good job today as well. I think we can really be happy finishing third, and starting the season here with a third place championship standing.”

“The guys had to be great in the stops, and they were,” Bryan Sellers agreed with his co-driver’s assessment of the pit crew. “If you look back at the total pit time, we were the GT car with the least amount of time spent in the pits. That’s a complete testament to how good our guys are. To be able to finish on the podium today, we needed to rely on them and then we needed to run a clean race. They came through, and ultimately we ended up coming through too.”

On track the three drivers – Henzler and Sellers joined by Nick Tandy on his 12 Hours of Sebring debut – avoided the contact and penalties that affected others in the race while the Porsche 911 GT3 RSR remained reliable as technical glitches sidelined potential winners throughout the race.

“A lot of preparation went into the off season to come out with a stronger package, from tires to car, to team,” said team manager Derrick Walker. “Particularly the tires it was a concentrated effort to make a new breed of tire that would perform better than what we had last year. We needed one that was better suited for the RSR. As the result showed, we closed the gap quite a bit with where we were last year. With the tires and the team, everything went according to plan. It was a perfect race for us other than we needed a bit more.”

Leaving Sebring International Raceway third in points the next ALMS date takes Team Falken Tire and the rest of the series to California and to streets of Long Beach for April 19-20.