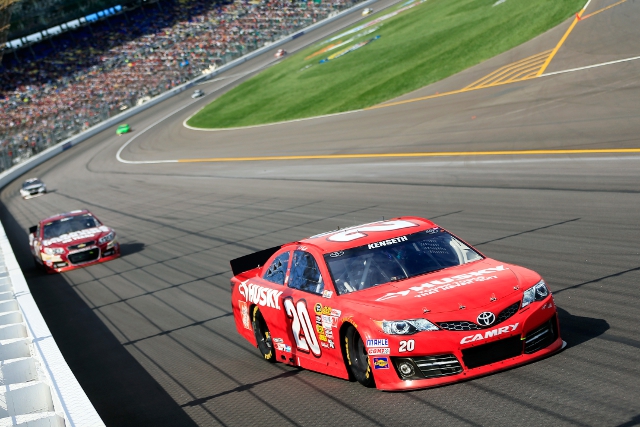 Kenseth dominated the early stages of the race, leading 111 out of the first 112 laps in a race that saw all three of his Joe Gibbs Racing team-mates crash out of the race.

“This is a dream come true to drive this car,” said Kenseth. “This car has been incredibly fast all season. These guys are contenders. I’m glad to be wheeling this thing.”

Kenseth’s closest challenger for the victory was Kasey Kahne, running side-by-side with the eventual winner with two laps to go, but couldn’t complete the move for the win.

“I really thought he had me,” added Kenseth. “My car started to get loose, and it got really loose with about five to go.” Kahne, though, suffered from the same issues and couldn’t get past the Joe Gibbs Toyota.

“It’s hard to believe we’ve got a huge gap like that in the points already.” Said Johnson. “I’m just very proud of everybody at Hendrick Motorsports. We’ve been off to a great year and even had some trouble at Bristol and didn’t finish as well as we did there. 37 points up on everybody is pretty awesome.”

As the race neared its conclusion, rookie Ricky Stenhouse, Jr. was holding the lead and looked strong to potentially take the victory. Unfortunately for Stenhouse, a caution for debris flew while he was on pit road, also catching out Dale Earnhardt, Jr. and Carl Edwards in the process.

Kenseth won the race off pit road and never looked back, as he led the field back to racing conditions and continued to win the race, despite Kahne’s late efforts.

Elsewhere, Kyle Busch‘s strong run of form came to an abrupt end as he spun out two times during the race. Busch came to Kansas on the back of five straight top-five finishes, winning two of the past three races.

By Justin Nguyen
2 Mins read
NASCAR Truck team GMS Racing will début in the Cup Series in 2022. A driver, number, sponsorship, and charter have not been revealed.
NASCAR

By Justin Nguyen
1 Mins read
Ahead of the next SRX race at Knoxville on Saturday, the series has made tweaks to the format after gauging fan requests following the season opener.
NASCAR Cup Series