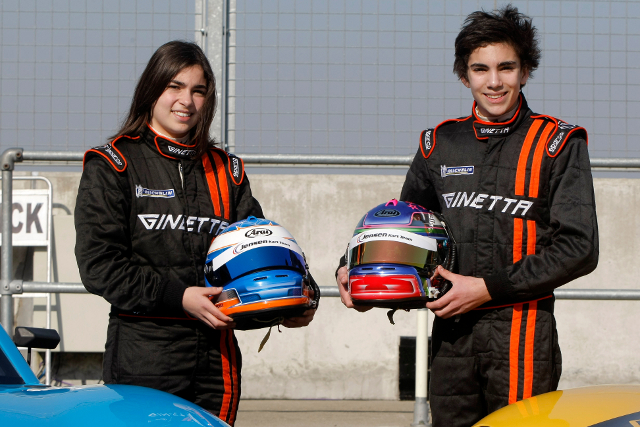 2013 is set to be an interesting year for the Chadwick family, with siblings Ollie and Jamie Chadwick battling it on track in the Ginetta Junior Championship.

Ollie enters his third season in the championship with JHR Developments this year, the 17 year old breaking into the top ten in his first season, before becoming a regular front-runner last season taking a maiden win at Rockingham, before finishing runner-up in the season-ending Winter Series.

Jamie joins the series this year alongside Ollie at JHR, the 14 year old having received a fully-funded season in the championship after overcoming over sixty aspiring young racers to secure the Ginetta Junior Scholarship, going on to make her debut in the Winter Series.

Ollie and Jamie will be writing regular blogs on The Checkered Flag this year, so we headed down to speak to them at the opening rounds of the 2013 season at Brands Hatch to get to know them a little bit better. 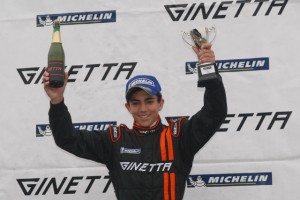 SP: Welcome to the TheCheckeredFlag.co.uk family. So first of all, how did you get into racing?

JC: “I was never the one really in to racing, Ollie was always in to cars, as was my dad. Ollie would go karting, basic arrive and drive stuff, and I was always with horses, as far away from the extremes of racing as possible. I was always saying to Ollie ‘I don’t want to be a racing driver’, ‘I don’t like racing’. I changed my mind when we went to an arrive and drive kart place in France. Me and Ollie were fairly close in times and we had a proper battle with each other. That caused my dad to get me a small cadet kart and from then it’s kind of been an addiction and love since.”

OC: “As Jamie said I used to do a lot of karting, we used to live on the Isle of Man where they’re petrolhead crazy. I got into it at a friend’s birthday party and it developed from there, I did minimax, junior rotax and then we moved into the Ginetta’s.”

SP: With both of you racing, does it kind of dominate your lives, or do you have other hobbies outside the sport?

OC: “It is pretty much racing all the time for me. We were filling a form out the other day for Ginetta that asked for other hobbies, and I couldn’t really think of any others than racing. So it really does take over my life.”

JC: “The horses have taken a back seat for me, but it’s something my mums still interested in it so I do still show an interest in it, as it’s nice to have something to take your mind off the racing. I also like Hockey, I used to play to a high-level of national hockey, but that’s also taken a back seat as I’ve progressed in motorsport.”

SP: Who are the drivers you look up to and want to emulate?

OC: “Sebastian Vettel is somebody I look up to. He’s progressed really well through Torro Rosso to Red Bull and is obviously doing so well, at a really young age, he was only 19 when he had his first race for BMW. He’s someone I aspire to be.”

JC: “I look up to Jenson Button. He’s a very good driver, but I look up to him not so much for his on track driving, but more how he comes across as a person off track. He’s a great ambassador for motorsport, he’s very genuine and I really respect him.” 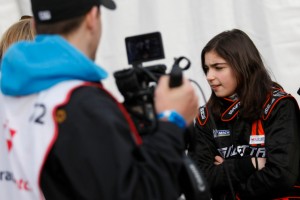 SP: You both picked out F1 drivers there, is competing in F1 the ultimate motorsport dream for you?

OC: “I think Formula One is definitely the main aim because it’s the pinnacle of motorsport, and there’s other series you can go from there like DTM and Indycar. I think single-seaters is possibly the most realistic next step for me.”

JC: “Formula One is the pinnacle of motorsport and it’s any young drivers dream to get there, but being realistic, being a professional racing drivers is obviously very difficult. I want to race as a driver for as long as I can, but any sort of career in motorsport is something I’d look for as it’s something I really enjoy.”

SP: Finally, what are your aims for this season?

OC: “We’ve certainly got to aim for the championship this year, as we only just missed out on the winter series title at the end of last year. It will be close fought, so consistency will be the key and our aim this season is almost to pick up a podium in every race, which would be sure to secure us the title in the long run.”

JC: “Top rookie is my initial aim, but looking into the long run, if I could sneak into podium contention around the middle of the season that would be great. It’s really a learning year for me though, I just want to do the best I can, be consistent by finishing all the races and then hopefully next year if I do it again, we can get in the title hunt.”

*You can follow the progress of the Chadwicks throughout 2013 on TheCheckeredFlag.co.uk with their blogs on site, as well as with our extensive coverage of the Ginetta Junior Championship*