Frank Stippler snared pole position for the Phoenix Racing team of he Michael Ammermueller, Ferdinand Stuck and Johannes Stuck after setting the best lap during the top 40 qualifying for the Nurburgring 24 Hours.

Qualifying the #4 Audi R8 LMS ultra in the two lap shootout Stippler held position twice during the session, the first during an exchange of the top spot at the drivers completed their opening flying laps. The battle for provisional pole began – obviously enough – with the first car to cross the line at the end of the first flying laps.

The honour went to Pedro Lamy in the Aston Martin Racing Vantage GT3 who jumped to the front of the session on the road on his warm-up lap, passing the only car that started ahead of him after the random draw – the SP7 Porsche of Jochen Krumbach and the Wochenspiegel Manthey team.

While Lamy’s first lap – 8:21.748 – was pushed back down the order into sixth by the time all the opening laps had been completed the clear track ahead of him proved to be an asset as he bounced back up to provisional pole on completing his second flyer, taking nearly three and a half second off his first lap to move onto a best time of 8:18.362.

“I’m really happy with my lap although it wasn’t fast enough to secure the pole,” said Lamy, a five time winner of the race. “I have a lot of experience here and have celebrated major successes in the past. In the race we must use the car’s full potential. I just enjoy being here – and being so fast is the icing on the cake.”

On the first lap first Marcel Fassler, then Stippler had followed Lamy onto provisional pole before Christian Mamerow put the #2 Abt Team Mamerow Audi on a provisional pole it would hold until Lamy came through on his second lap.

The value of clear track was proven as Mamerow had to deal with Marco Hartung in the #125 ROWE Racing Mercedes. Mamerow had caught the Mercedes man on his second lap, but the two came down the Doettinger Hohe straight side by side. The Audi was almost forced onto the grass on drivers right at full speed before Mamerow had to yield behind Hartung as they approached the Teirgarten kink and chicane. The battle clearly cost the Audi driver – his second lap five seconds slower than his first lap – and he made his feelings known as the two drivers ran side by side through the GP track.

“What a great format,” reflected Mamerow. “Having the Nordschleife for you alone and being able to take the car to it’s very limits feels just great, The second lap would have been even better but #125 refused to let me pass.”

Ahead of him Stippler had taken a second off Lamy’s time to once again take pole position, this time for good with a lap of 8:17.212, with Lamy ending the session second in the Bilstein liveried car he shares with fellow AMR works men Darren Turner, Stefan Mucke and Allan Simonsen.

“I just experienced something that can make you proud; a free lap on the Nordschleife. Such and experience after 38 years at the Nordschleife feels just great,” said Stippler. “It was huge fun. I’m convinced that completing a perfect Nordschleife lap is possible – and I think I wasn’t too far away from doing so.”

“We know that it was just atiny step and that the pole position is virtually meaningless in the case of the 24 hour race. There are so many teams on the same level and Aston Martin is one of them. I won here last year and we have all the compenents [this year]. Why shouldn’t we be able to fight for the win again.”

On the strength of his first lap Mamerow held on to third place, joined on the second row of the grid by the #50 Manthey Racing Porsche piloted in the shootout by Richard Lietz. 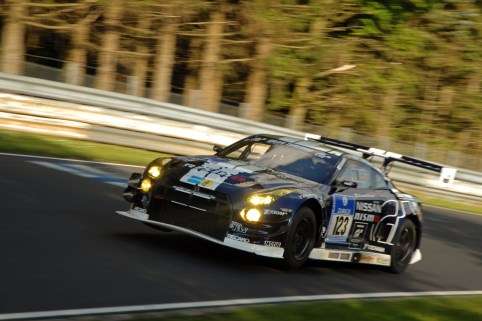 Having set the pace in the free practice and both of the open qualifying sessions the best Mercedes SLS will start from sixth thanks to Briton Sean Edwards in the #9 Black Falcon Mercedes. He will share the third row with the #1 Audi of G-Drive by Phoenix.

The best non-SP9 car was supplied by Manthey Racing and Timo Bernhard, leading the five SP7 class Porsches that made it into the top 40. The other class represented in the session – SP8 – ended with its two fastest cars split by only three tenths of a second in 30th and 31st fastest with Kazuka Oshima just in the Gazoo Racing Lexus LFA just edging out the GT Corse Ferrari 458 qualified by Maximilian Gotz.

The session was not problem free. Dorr Motorsport’s McLaren MP4-12C GT3 failed to complete a flying lap after losing a wheel on its out lap. The car did start the session – albeit from the pitlane – but the car failed to set a time in the session.

Walkenhorst Motorsport’s BMW Z4 had a spin on its formation lap in the hands of Ralf Oeverhaus, though he continued on apparently without issue to qualifying 36th fastest.

The Nurburgring 24 Hours itself begins at 5pm local time (4pm UK) tomorrow (Sunday May 19). theCheckeredFlag.co.uk will have updates throughout the race.