SBK Monza Race Two: Laverty Gets His Own Back 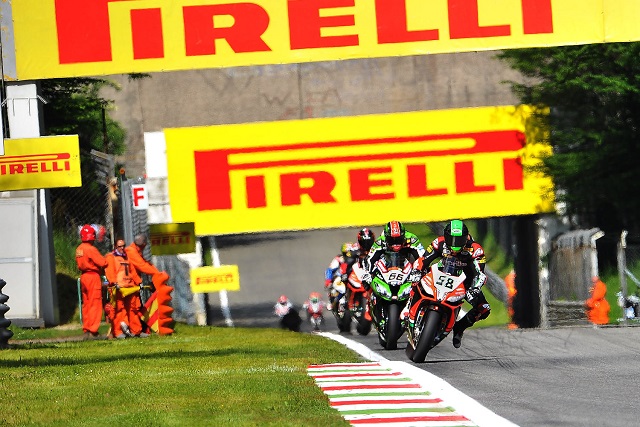 Eugene Laverty turned the tables on Marco Melandri after their race one duel by pipping the Italian to victory in race two at Monza. The Irishman resisted a final lap challenge from BMW’s Melandri to close the gap on championship leader Sylvain Guintoli to thirteen points with the Frenchman finishing fourth again following a controversial incident with Tom Sykes.

Despite a bright start from Althea’s Davide Giugliano, the four riders that had dominated the earlier race pulled away from the rest of the field. They had briefly been joined by the second GoldBet BMW of Chaz Davies but the Welshman ruined his chances by overshooting the first chicane, followed by a crash at the Roggia on lap twelve.

Guintoli was putting up a much tougher fight after fading in race one but Laverty would get the better of his teammate two laps from home with a move into Ascari. Sylvain wouldn’t get the chance to launch a counter attack as Melandri dived through at the Parabolica seconds later, pushing him back to third.

Guintoli’s problems didn’t end there as Sykes put his podium position under immediate threat and the Kawasaki eased through on the run up the Roggia Chicane. Once the Yorkshireman got there though, he was forced to take evasive action as his late braking edged him dangerously close to Melandri’s BMW ahead. Sykes was forced to take to the escape road but rejoined in third, arguing that he had already completed the overtaking move before reaching the braking zone. The stewards initially disagreed and relegated him behind Guintoli but after a successful appeal, Sykes was allowed to keep third position behind the victorious Laverty and second placed Melandri.

Following Davies’ retirement, Michel Fabrizio finished fifth after getting the better of Giugliano’s Aprilia while Leon Camier brought the sole remaining Suzuki home in seventh, Jules Cluzel having crashed on lap two. Loris Baz was eighth for Kawasaki ahead of Ayrton Badovini and Max Neukirchner but it was a race to forget for Honda as Jonathan Rea and Kosuke Akiyoshi dropped out within a lap of each other.