Adam Sharpe Takes Rapier To The Point In Qualifying 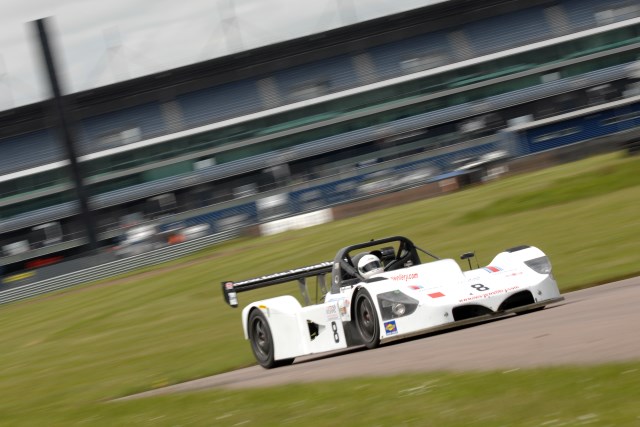 Schulz, co-driving with Paul Bailey in their Aston Martin Vantage GT3, set the pace early on, quickly setting a time of 1:22.990 around the International Super Sportscar Long circuit. That lap put the Aston, which Bailey and Schulz took to victory at Silverstone in the most recent round, more than four seconds clear as Mike Millard put the Rapier SR2 second quickest.

He would lose second place to Javier Morcillo after the Spaniard took over from countryman Manuel Cintrano in the Neil Garner Motorsport Mosler. Morcillo moved the car into second, cutting Schulz’s advantage to just 1.4 seconds.

His progress was to stop there however as the engine in the Mosler gave up as he rounded turn one, the car coasting to a halt before the Deene hairpin with terminal engine failure that will whittle down an already thin field of cars still further.

Following a red flag to enable recovery of the stranded Mosler Adam Sharpe stepped into the Rapier in place of Millard and immediately improved the cars time before moving into pole position.

While the Aston’s best time stood still Sharpe chipped away over a sequence of laps down to a time of 1:22.231, 0.759 seconds faster than Schulz’s long standing pole effort.

Behind a Mosler set to be absent from the race grid Ian Loggie and Chris Jones led Class Two in their Team Parker Porsche. Webb brothers James and Tom led Class Three in fifth overall.